With a delightful Caroline Shaw premiere, the Miró Quartet heralds a joyous return of live music to Shriver Hall 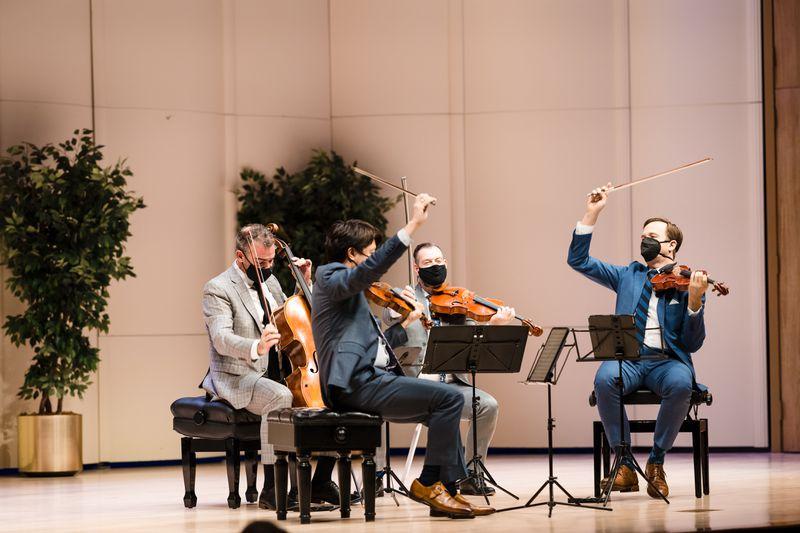 By Charles T. Downey for the Washington Classical Review

It was a time for celebration and thanksgiving when the Miró Quartet took the stage at Shriver Hall Sunday evening. The event was the first live concert at the venue, on the campus of Baltimore’s Johns Hopkins University, in 617 days. Like most presenters the series weathered the coronavirus pandemic with streaming concerts, but now it welcomed back listeners to its renovated hall, completed in 2019 to the tune of $14 million.

The Miró Quartet opened with Mozart’s String Quartet No. 17 (“Hunt”), seated in an unusual split-violin configuration—from left to right, first violinist Daniel Ching, cellist Joshua Gindele, violist John Largess, and second violinist William Fedkenheuer. In the boisterous first movement, which earned the quartet its nickname, the arrangement brought out the antiphonal lines between the violinists, at the same time often burying the viola’s tone in the mix.

Restraint marked the approach, providing a warm cushion of sound for Ching’s soaring but often reserved tone. The second movement had a pleasing moderate pace for a minuet, especially noble in the Trio, more detached in articulation. With plenty of rubato and vibrato, the slow third movement was a delight, a lush and poised ensemble sound that invited listeners to lean in and appreciate each detail. By contrast the frenetic Finale caused some intonation troubles, with the closeness of Ching to the solid tone of Gindele’s cello leading to some harshness at the top.

In the middle of the program came the world premiere of Caroline Shaw’s Microfictions [Vol. 1], a set of six miniatures inspired by the surreal paintings of the quartet’s painterly namesake, as well as the bite-sized science fiction published on Twitter by T. R. Darling.

Shaw was on hand to give a brief introduction to the performance. She explained how the work came into being, in collaboration with the musicians by teleconference during the pandemic lockdowns. In her composer’s note, Shaw gave the full texts of the “microfictional” works she wrote for each movement, complete with tantalizing musical terms one tried to connect with the music she composed. The first movement opened with high, flute-like notes sparked in the first violin and then igniting the rest of the quartet. The texture became more smooth and homophonic, with a series of lush chords sometimes enlivened by plucked notes and dissonance. In the second movement, perhaps responding to the image of smeared photographs, Shaw called for glissando chords that blurred and then came into focus, as well as some microtonal bends.

The more chaotic third movement echoed its text about a summer storm, with chromatic ascending lines and raindrop pizzicati notes. Acknowledging the problem listeners might have with understanding where one movement ends or another begins, there was a tongue-in-cheek movement numbered 3½, consisting only of second violinist Fedkenheuer waving broadly and calling out “Hello” in a high voice.

An arpeggiated figure bowed across the strings ran through the fourth movement, perhaps the “chord that fell from grace” mentioned in its text. The musicians took turns interrupting one another, often introducing a new tonal center to which the others adapted. The “bird repeating its solitary caption” of the fifth movement’s text corresponded to an ostinato figure, developed through articulation changes and a gradual accelerando until it broke down into chaos.

In the hallucinatory sixth and final movement, the quartet had to scrape a sonic path toward a series of chords, triads materializing out of toneless clusters. Like the tiny stories that inspired it, this music did not have much time to develop, but this 20-minute co-commission from Shriver Hall Concert Series and other presenters made a delightful contrast to the larger traditional works that surrounded it.

The evening came to a close in much deeper emotion with Beethoven’s elegiac String Quartet No. 15, created after the composer had suffered an entire winter with a near-fatal intestinal ailment. The work is anchored on its massive central movement, which Beethoven titled “Heiliger Dankgesang” (“Holy song of thanksgiving of a convalescent to the Deity, in the Lydian mode”). This arching chorale, played exquisitely, became doubly poignant to all those listening, who have (hopefully) come through the other side of the coronavirus pandemic.

Ching’s lightning-fast runs stirred up the first movement, after a pensive introduction. The musicians accented strong contrasts of sound with exemplary unity of purpose, again pushing the first violinist into a harsh squeal in the stratospheric passages. Group intonation did not quite settle in the second movement either, including in the music-box theme accompanied by rustic drones like a hurdy-gurdy.

Minimal vibrato gave the slow sections of the “Heiliger Dankgesang” a fragile quality, a now impeccably tuned ensemble sound, as lines rose past one another toward the heavens in long-breathed arches. The faster sections, marked by Beethoven as “feeling new strength,” floated in elation. With each return of the chorale music, the experience became more and more introspective, as if the recovering patient almost could not believe he had survived.

Ching excelled in the brilliant solo cadenza of the fourth movement, overall a jaunty moment of levity that burst the veil created by the “Heiliger Dankgesang.” In the concluding fifth movement, again overdone a bit in speed and volume, the quartet drove ecstatically toward the Presto finish, as if overcome by the joy of performing for a live audience again. The selection of Beethoven also drew attention to the Miró Quartet’s complete recording of the composer’s quartets, released on the Pentatone label in November 2019.

A charming encore, an arrangement of Jay Ungar’s fiddle tune “Ashokan Farewell,” was familiar from Ken Burn’s Civil War documentary, although it was composed in the 1980s. Second violinist William Fedkenheuer, who introduced the piece, was named a Canadian national fiddle champion in 1989. Here he took the lead role in a nostalgic rendition of this lovely tune, based on Scottish folk songs, in a last moment of thanksgiving for the joy of live performance.