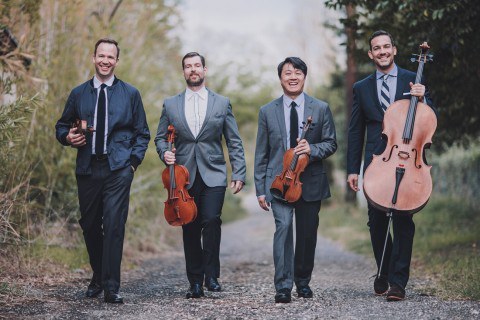 By Brian Kelly for The Sault Star

What started as a class assignment for Joshua Gindele evolved into a musical journey that’s approaching its 25th year.

Miro Quartet formed as a degree requirement for Gindele to get chamber music experience.

“I think the thing that brought us together was just the fact that we loved doing it,” Gindele told The Sault Star in a recent telephone interview from Austin, Tex. “We thought that it was really fun. We knew that everybody was really going to take it seriously, work hard, try to play good repertoire and try to sound good. But I don’t think there was any intention right from the beginning of trying to make a career. We were just having fun. We were so young. I don’t know if any of that had entered our minds.”

Gindele still experiences thrills from repertoire performed just like he did when the group started.

“You would think that would go away after having done it so long, but it doesn’t,” he said. “ It’s great. We’re still having a lot of fun. There’s just so much repertoire for the string quartet. It’s so involved, so dense and complicated. There’s always something to explore.”

The program includes Credo, the first work written for the group by Kevin Puts.

He was a professor at University of Texas when the group was the post-secondary institution’s quartet in residence. Puts was asked to create a work that explored “the bright and positive side of America.

“We thought his musical language lent itself to that kind of thing,” said Gindele. But, the commission initially proved daunting for the Mississouri native.

With war, including American military action in Iraq, and mass shootings in the United States, Puts “was really struggling to find something to draw inspiration from,” said Gindele. Inspiration came when Puts started to consider what he experienced each day “that he found poignant and just beautiful.

“(Credo) is a little collection of vignettes, little snapshots of his life,” said Gindele. “He finally realized, I guess in the process, he really has a lot to be thankful for and (there) really are a lot of things to be grateful for. There’s a lot of hope and joy in our society that maybe has to peek through the ugliness from time to time.”

Credo continues to be played by the group more than a decade after its premiere.

“His music, it has an effect on people. It impacts people,” said Gindele. “We haven’t stopped playing it because it’s been successful and people love it so much. It’s staying in our repertoire.”

“It’s just a thrill to finally have them done and we can get them out to the public,” said Gindele.

Paying attention to how members speak, treat and work with each other has helped Miro Quartet last 25 years. Gindele calls those ways of respecting fellow musicians “our first priority.

“If our relationships aren’t good and people aren’t happy, then the music making can’t happen,” he said.