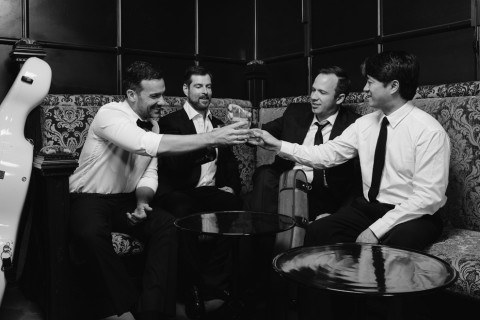 With an avowed modernist like Bang on a Can All-Stars co-founder Steven Schick on the podium, it stands to reason that this weekend’s St. Paul Chamber Orchestra concerts don’t make conformity to convention a priority.

Hence, two premieres make up the middle of an upside-down concert that opens with a symphony (Beethoven’s First) and ends with an overture (from Gioachino Rossini’s “The Barber of Seville”). But the new works shone brightest. On a snowy Thursday evening at St. Paul’s Ordway Center, the Miró Quartet joined the SPCO for a powerful new piece by Kevin Puts that overflowed with drama and tension. And it was complemented well by a John Luther Adams work with an imaginative structure and a hypnotic sound world.

The best reason to catch one of this weekend’s concerts is Puts’ “How Wild the Sea.” For those who weren’t fortunate enough to experience Minnesota Opera’s 2011 production of Puts’ opera, “Silent Night” (which won the composer a Pulitzer), this is another opportunity to immerse yourself in his intensely emotional music. A piece for string quartet and orchestra, “How Wild the Sea” was inspired by the tsunami that surged over the coast of Japan in 2011.

It’s a work full of sorrow, anxiety and, ultimately, driving determination, its turbulent conflicts grippingly voiced by the exceptional Miró Quartet, the foursome establishing themes sometimes taken up by the orchestra, other times engaging in a colloquy of cries and commiseration. It’s hard to imagine the work’s challenges being handled with more emotional complexity and expert musicianship.

The title for John Luther Adams’ “Become River” was inspired by a John Cage poem, and Cage’s imaginative experiments with structure clearly influenced it. The SPCO was separated into sections in which the highest-toned instruments were at the back of the stage and the lowest at the front. The music traveled downstage, phrases flowing together like rivulets into a central stream. It proved mesmerizing, although it appealed more in its imagination than its emotional engagement. Then again, the Puts set a high bar for that.