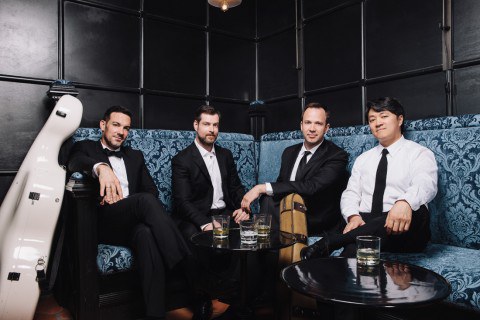 It used to be said that Joseph Haydn was the “father of the symphony.” Nowadays we are more historically informed, and if we are to award Haydn that distinction, we would have to stipulate that there were quite a few uncles, godfathers and the like involved. But Papa Haydn does indeed seem to have been the first composer of string quartets as we conceive of them nowadays.

Thus it’s always a pleasure when a quartet recital includes one of his works. Thursday evening the Miró Quartet began their Chamberfest concert with the Quartet in D minor, op. 76, no. 2, sometimes nicknamed the Quinten or the Donkey Quartet.

The performance was outstanding, each movement offering its particular rewards. Perhaps the most memorable was the third, with the most striking trio likely to hear, but also remarkable were the poise and elegance of the theme-and-variations and the fire of the finale.

Philip Glass was one of the first of the composers we’ve come to call “minimalist,” and remains the best known of them. However, he disowns the label, preferring to call himself a classicist. Indeed his music has evolved from the severe repetitiveness of his early work to techniques that most listeners find at least moderately congenial. One thing that hasn’t changed, though, is his avoidance of affective dissonance and other techniques that marked the avant-garde of the early postwar decades.

The Mirós played his String Quartet no. 5 Thursday evening, making an excellent case for it. There were long moments of great beauty, particularly in the slow middle movement. Still, some of the score yields to the mechanical-sounding repetitions that many listeners find tiresome.

Pianist Jon Kimura Parker joined the Mirós to perform the Brahms Piano Quintet in F minor, op. 34, one of the most justly popular works of the chamber repertoire.

Although the tempo of the first movement was marginally slower than we normally hear, its musical and emotional contours were carefully sculpted and the cumulative effect was powerful. The slow movement had its beauties, some of them considerable, but there was an over-earnest feeling at times.

There was a furious majesty to the Scherzo, setting the stage for the subtler, more complex music of the finale. The latter was a carefully developed culmination of all that had gone before, and its coda was glorious.