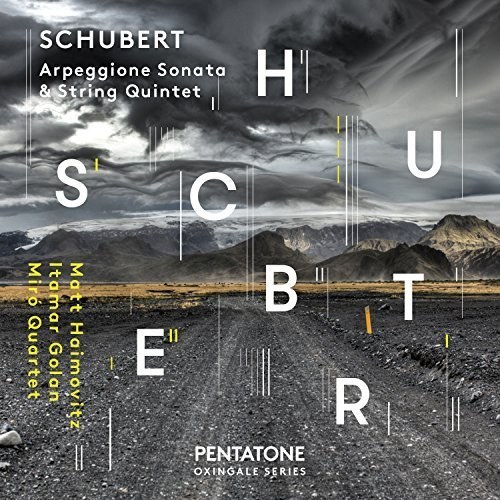 by Gary Lemco for Audiophile Audition

From the opening piano chords in Schubert’s 1824 Arpeggione Sonata – the obsolete instrument’s having been supplanted by the modern cello – we find ourselves enthralled by Itamar’s seductive keyboard and the sympathetic sonority of the Matt Haimovitz instrument, a 1710 Matteo Gofriller cello. The original recording (30 October 2001) enjoys the remastered sonics that project the glories of Schubert’s lyric genius to full advantage. The music blends a Bohemian ethos into a three-part song that asks of the solo part flurries of bravura filigree interspersed with broken chords, both arco and pizzicato.  The first movement, Allegro moderato, projects a resigned, autumnal nostalgia that we must attribute to the composer’s awareness of his fateful mortality.  The Adagio presents a quiet, intimate lied of rarified beauty, a sentiment that transforms into a slow, darkly-hued waltz marked by plangent, low tones in the cello. The tempo becomes virtually funereal until the music transitions into the Allegretto finale, set in A Major, to mirror much of the first movement’s a minor material. Haimovitz and Golan manage to set the music dancing, inasmuch as the sighing, sometimes capricious, figures permit.

The exquisite C Major String Quintet (rec. 2-5 June 2003) always compels us to consider the grave relationship between beauty and death, a constant motif in Schubert’s oeuvre. The close microphone placement in this recording nicely separates the extra cello part, without having lost focus on the grounding influence of cellist Joshua Gindele’s part. The music moves between periods of exalted lyricism and anguished despair, the syncopations’ often hinting at gypsy or Magyar influences. Typical of late Schubert, the music develops a pattern of cross rhythms, displacing its “folk” character with “learned” effects. The first movement’s main melody, naturally, proffers utter serenity of spirit, “a consummation devoutly to be wished.”  Potent utterances erupt from the first violin, Daniel Ching and viola, John Largess. The (bagpipe) drone figures make an eerie foil to the unearthly character of the song, invoking a perpetual tension between heaven and earth, the timely and the timeless.

Yet another vision of loveliness evolves in the Adagio, whose haunted intimacy inspires in us grief and hope, at once. From an ardent, transcendent chorale the music progresses into emotional turmoil, manifest in the grimly syncopated, gypsy figures in the low strings of the Miro Quartet. At moments, the agony becomes unbearable, until the storm subsides, almost stuttering in its collapse, and then grudging rays of light once more infiltrate the darkness, in the form of a tender lyric from the first violin, sadly finding response in the cello. If the movement seems to invoke the Biblical passage from 1 Corinthians 13:12, the allusion may not be frivolous. Both gypsy and “hunting” energies permeate the ensuing, bustling Scherzo, in which the violin enjoys a concertante virtuosity.  When the ensemble plays in unison, the effect becomes nothing less than symphonic. The Trio projects a contrasting sense of repose, though not without “gypsy,” ornamental touches of storm clouds.  Eight bars of transition, and we lunge forward into the wild antics of the da capo, whose sudden, jarring accents highlight the frenzied desire to find vitality in Yeats’s “dying animal.” For a final Allegro, Schubert employs Haydn’s favorite device, the rondo-sonata form, a rather solemn dance, given the gravity of the composer’s circumstance. A tender song wafts its way, often in harmonies and sonic combinations once more akin to gypsy style. When the two cellos once more duet – as they had in the first movement – we experience the uncanny admixture and transience and immortality that has ravished us into the faith that beauty ought to reign triumphant.