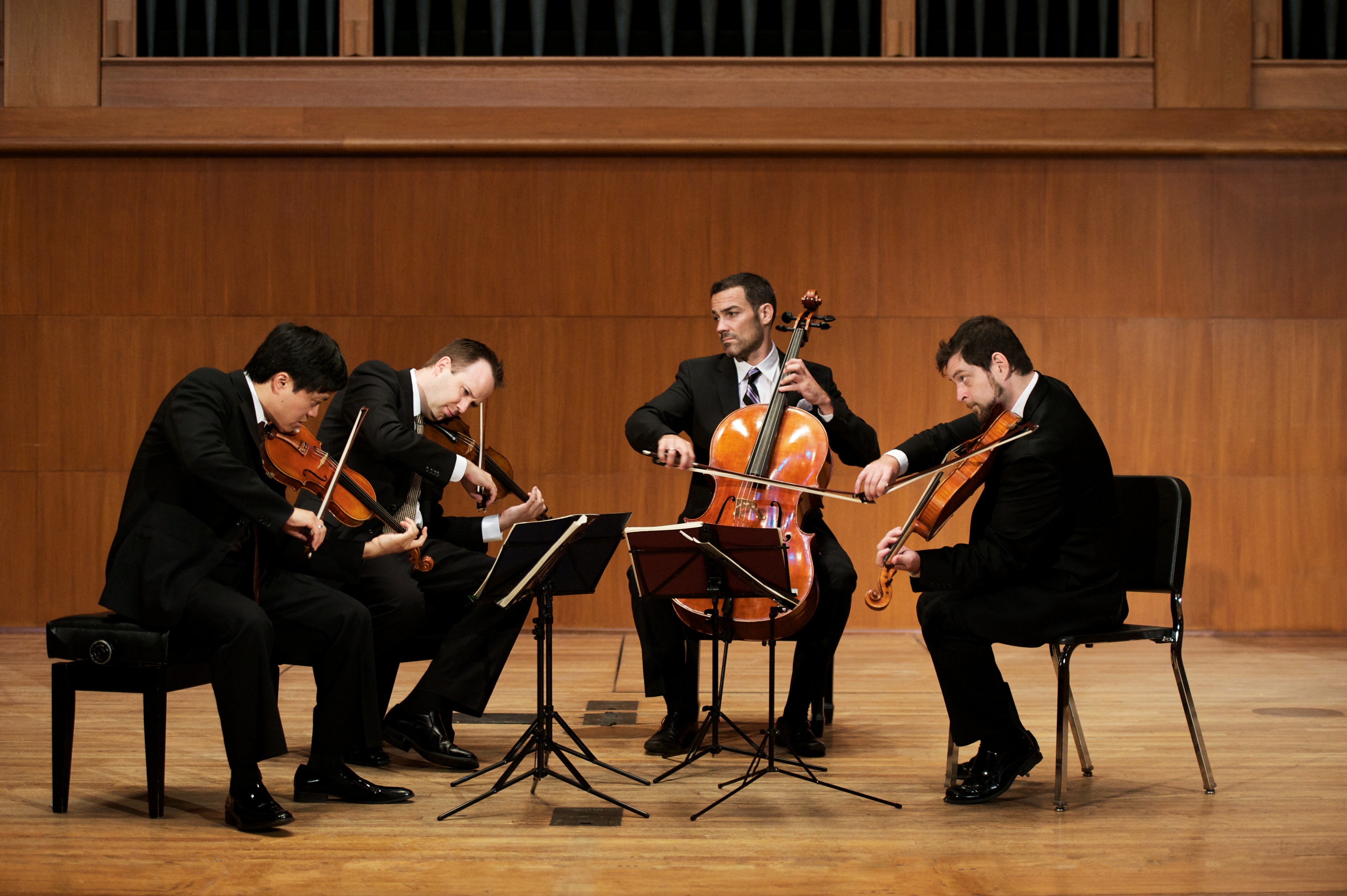 By Michael Broder, Special to the Palm Beach Daily News

To put the evening in context, one turns to history. While not nearly as numerous as pieces for string quartet, compositions for string quintet are not rare. More often than not, however, when adding a fifth player to the staple chamber string ensemble, composers would choose an extra viola. (Johannes Brahms, Antonin Dvoák and Felix Mendelssohn each wrote two quintets of this instrumentation, and Wolfgang Amadeus Mozart wrote six.) But the addition of an extra cello to the string quartet (the “cello quintet”) is something special, not only in its relative uncommonness but in its powerful expressive potential. The Miró Quartet and Greensmith clearly understand that potential, and it definitely showed on Tuesday evening.

To call the quintet’s performance flawless, while accurate, would undermine a much greater achievement. Many musical performances are without error, but few demonstrate the supreme artistic vision, collaborative vitality and emotional mastery that Miró and Greensmith have. As the opening vehicle for their stirring artistry the ensemble chose Boccherini’s little-known (but hugely charming) ″Musica notturna delle estrade di Madrid.″ (Of historical significance, Boccherini was the exception to the rule, producing over 100 works for cello quintet.)

The ensemble sold each depicted image beautifully. In the hands of these masters, the work’s hymnlike prayerful passages were stirring enough to draw tears, and its jovial celebrations lively enough to evoke real laughter. In addition to their superb playing, the ensemble’s stage presence was a joy to watch, demonstrating their appreciation for the work’s programmatic charm as well as their sensitivity for the artistic cohesion of its diverse musical content.

During a passage depicting a street-side celebration, violinist William Fedkenheuer spun away from his music stand to face the audience, grinning, his knees rocking in jaunty dancing rhythm as he churned out a delightfully flashy solo passage. The joke was perfect.

Following the lighthearted Boccherini was the much longer — yet no less joyous — quintet by Schubert. The beauty of Schubert’s quintet comes from the interaction of its reassuring long-range musical developments and its unexpected harmonic choices. This coupling creates the dramatic effect of an emotional journey, like a person taking lengths to remain joyful despite meeting unexpected stresses and moments of turmoil.

Indeed, Schubert’s last quintet is a masterpiece of emotional fortitude. Throughout the quintet’s substantial 50 minutes, Schubert maintains a stunning cohesiveness of musical emotion through which moments of contrast feel like genuine experiential changes rather than designed differences.

Nowhere in the piece is this emotional fortitude more present than in its second movement. For much of the movement, the harmonies change at a glacially slow pace, many lasting around 10 seconds, which in the classical concert tradition can feel like a lifetime. Coupled with harmonic and melodic patterns just predictable enough to reward the listener’s sense of expectation without becoming stale, these stoically slow chord progressions produce a mood of meditative transcendence not often heard in all the classical repertoire.

Throughout the movement’s long phrases, the listener is granted the sensation of being on a journey, traversing great spans toward some unseen but highly anticipated final goal, stolidly measuring the pace of the voyage.

For an ensemble to realize such a grand artistic vision effectively is no small feat. Yet the quintet’s performance was supreme, demonstrating immense musical maturity, synergy, and understanding not only in the work’s challenging second movement, but throughout the evening.

Truly, Miró and Greensmith are musicians of that rare caliber that transports audiences from the ordinary to the sublime.

Pensive Reflections from Miró and McGill