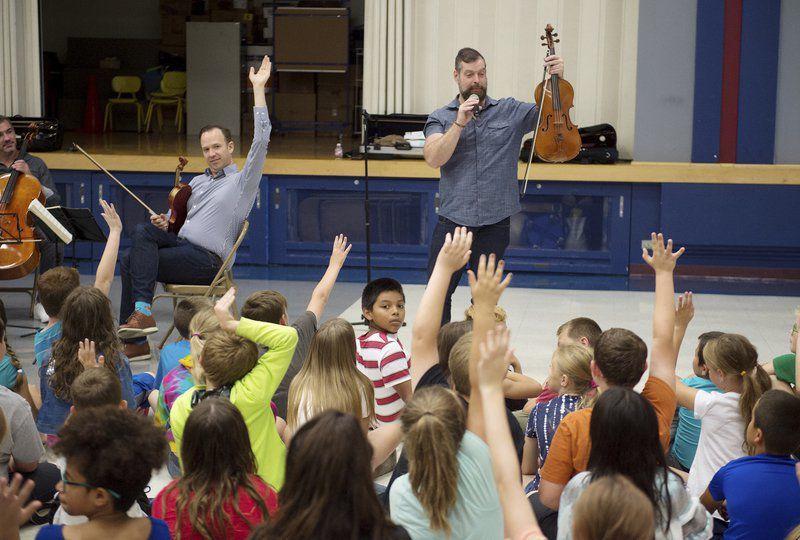 By Kevin McClintock for The Joplin Globe

Maybe because kids are told to be quiet during shows held inside auditoriums, or maybe because classical music presentations are often blanketed in silence, it took some time before a gathering of Joplin elementary students let loose with loud cheers and foot stomps during a musical presentation Thursday morning.

And boy did they ever — particularly when the four performing musicians of the Texas-based Miro Quartet — Daniel Ching, William Fedkenheuer, John Largess and Joshua Gindele — played a very non-chamber musical classic for them, the “Orange Blossom Special.”

Giggling when Largess would whistle the classic train whistle, more than 200 fourth and fifth grade Joplin students clapped their hands, stomped their feet and — urged on by a grinning Ching — hooted and hollered at the top of their lungs.

“The kids just love it,” said Deb Billings, Pro Musica’s director. No, “Orange Blossom Special” isn’t Mozart, but it gets the kids involved in a fun song that most of them know and enjoy, “and it shows them both the versatility of the instruments (violin, viola and the cello) and them as musicians.”

The educational shows, Billings said, “have just been amazing.”

Sure, the four men played a classical song at the beginning of the hourlong program, and sure, each musician made sure to smile and make eye contact and nod his head at the various children listening to them play, but the program is designed to go far beyond playing Mozart to a captive audience.

After explaining what a string quartet is and does, the four took turns showing off their instruments — what they were, how each one made its distinct high or low sounds (remember, bigger means deeper) and how each sounded individually. Then, rather dramatically, the four men then demonstrated, slowly and carefully, how each one could be blended together to create something entirely new: the cello creating the baseline, a violin and viola combining to create the harmony, and the second violin creating the melody.

Each also spoke about how they became professional musicians. Ching, for example, began playing the violin at the age of 3 and was just 10 years old when he joined his first string quartet. In fact, just hours after he was born, he shared his crib with a violin. The children giggled when he admitted he and the musical instrument “were the same size.”

Gindele, who plays the cello, spoke about what life was like when he was in high school, the dedication that he put into learning how play his instrument while also participating in other school activities. He said he would rise before dawn on school days to work out so he could participate in high school sports before heading off to school, coming home afterward, doing his homework and then practicing his cello.

Miro Quartet is an ensemble with a strong commitment to arts education, Billings said. The quartet has given master classes all around the world and is also the quartet-in-residence at the University of Texas at Austin.

Each member has had an early experience when, at a young age, he heard a live string quartet for the first time, said Largess, who plays the viola, and each understands how life-changing such experiences can be.

“The most important thing (to us) is just getting young people exposed to live music: Young people who hear us play live, watch us up close, meet us, talk to us, they won’t feel any barriers to listening, and their curiosity about all music will naturally grow,” he said.

Billings couldn’t agree more: “I like to think, and I have no numbers to support this, but I can’t help but think that (Joplin High School) still has a strong and healthy string program says something about what we’re doing.”

Because Pro Musica is a nonprofit, “our concerts are offered at no charge. It just says something about our mission that we’re not out there to make a buck — our mission is to create and sustain a love for music.”