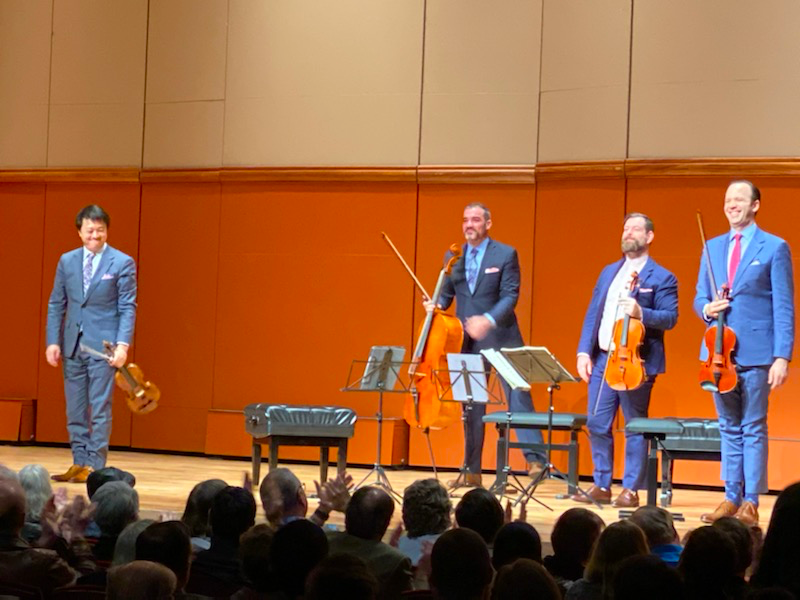 By Elizabeth Corlett Sweeney for The Lively Arts (redux)

Miró String Quartet, winner of the 2005 Avery Fisher Career Grant, celebrated their 25th season in Denver with their third appearance with Friends of Chamber Music. They first appeared with pianist Shai Wosner in 2009 and again in 2012. The Texas based quartet, formed in 1995, has been in residence at UT Austin’s Butler School of Music since 2003. Violinist Daniel Ching is a founding member as is cellist Joshua Gindele. Violist John Largess joined two years later. In 2011 violinist William Fedkenheuer replaced Sandy Yamamoto, Daniel Ching’s wife and current professor at Butler. Fedkenheuer was a Canadian national fiddle champion before studying at Rice and Indiana Universities.

In 1998 The Miró won first prize at the Banff International String Quartet Competition and in 2005 they were awarded an Avery Fisher Career Grant, the first for an ensemble. They reflected on their longevity with the Archive Project that celebrates the lineage of revered string quartets like their mentors, The Juilliard String Quartet. In November they released a new recording of all of the Beethoven string quartets. While the Friends of Chamber Music program was conservative, audiences at the 2019 Orcas Island Chamber Music Festival heard Home, a new quartet written by Kevin Puts for the quartet’s anniversary. When I spoke with Joshua he said he could be content to just play Schubert. His favorite quartet by Schubert is Quartet #15 in G Major. Although it isn’t performed often, he referred to it as an explosive work.

Despite an unfortunate occurrence with John Largess’s viola and the heel of someone’s shoe before another performance, the group credited their ability to simply get along for their longevity. When asked if they ever took retreats together to reignite their energy, Joshua confessed that they had met with a psychologist and he felt it really helped their connection. Now they have plans in the middle of February to perform and stay at a Wellness Retreat in Baja California, Mexico at Rancho La Puerta for chamber music. A difficult assignment!

The Denver audience was swept to their feet at the end of the first half by Beethoven’s String Quartet #10 in E Flat Major, Opus 74, known as the ‘Harp’ quartet for the composer’s use of plucking in the second movement. This resounding performance was preceded by Mozart’s Quartet #17 in B flat major, K. 458, “The Hunt,” that was elegant and eloquent as expected from a quartet dedicated to Haydn.

The members of the Miró were as a married couple celebrating their 25th anniversary in Schubert’s Death and the Maiden Quartet #14 in D Minor, finishing one another’s sentences as they anticipated the others’ breath and bowing. The second movement of the Schubert was both persuasive and tender. The Maiden vehemently defies Death, protesting her secret understanding of Death’s tender touch. The tension propelled the push and pull that was unleashed in the final movement. Daniel’s violin led the Presto movement with fervor. It was a march that unleashed Schubert’s conflicting emotions about Death and exhibited the finest quartet playing Denver audiences have heard this season.