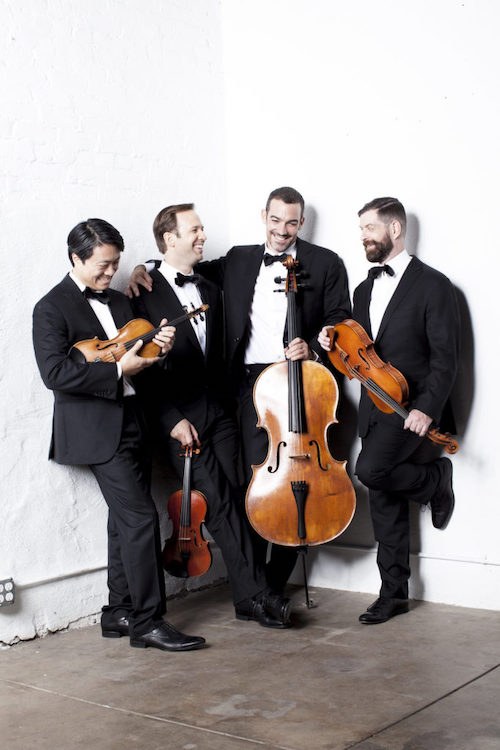 The Miró Quartet at Weill Hall, performing the New York premiere of Caroline Shaw's Microfictions (Volume I), book-ended by works of Haydn and Dvořák. It was a spectacular evening of music-making.

Haydn's String Quartet in B-flat Major, Op. 64, No. 3, opened the program. Following an elegant start, the Vivace assai bounces joyously along. It abounds in irregular, interrupted passages, sweet harmonies, and lovely violin themes. Cellist Joshua Gindele's incredibly bountiful tone - a delight to the ear throughout the evening - maintains rhythmic vitality. In the ensuing Adagio, the sounds of violinists Daniel Ching and William Fedkenheuer are entwined in duet passages, whilst again Mr. Gindele's depth of sound was so pleasing. The musicians achieved a perfect lyrical blend, playing with extraordinary clarity. A darkish coda brings the movement to an end.

The charming Minuet is laced with touches of wit, and then the concluding Allegro con spirito is off to a scurrying start. The playing is crisp and agile, making this familiar work feel so fresh. Briefly, Haydn lets the music's vitality seems to sag, only to re-kindle, leading to a brilliant finish.

Caroline Shaw's Microfictions [Volume 1] - in its New York premiere, co-commissioned by Carnegie Hall - is a marvelous work, marvelously played by the Miró. Spending more than usual amounts of time on the internet during the pandemic - as most of us did - Ms. Shaw became intrigued with T.R. Darling's microfictions, as published on Twitter. Six of these became the movements of Ms. Shaw's work, and she prefaced each one with a few lines of text, which the four musicians took turns reading to us.

Under the hot sun... opens with isolated high violin notes. Hesitant harmonies arise; the music is briefly expansive before delicate plucking takes over.

The summer storm laughed... is restless, with off-kilter harmonies. Accented plucking overlays a rolling accompaniment figuration; then the music sputters out.

Then came a very brief interlude, in which the quartet's William Fedkenheuer said, "Hi!"

The complex taxonomy... commences with somber harmonies and a restless passage from John Largess's viola. Following bursts of passion and a remarkably sustained deep cello note, Mr. Largess continues the viola's agitation. The music grows in intensity; the viola's anxiousness is picked up by Mr. Gindele's cello. The music slowly fades away.

Waking up on the early side... (which is my own chronic problem) features accented patterns with Mr. Ching's violin singing a lyrical counter-song. The music accelerates before reaching a sudden stop.

The mountains folded in... is perhaps the work's most remarkable sound-painting. Eerie, dryish chords seem to indicate the slow shiftings of the Earth over the span of timeless ages. Following a solo violin passage, the music turns dense, leading to a bright chord. Then the slow, grinding sounds resume. Pensive harmonies are heard, and the music becomes rich and loud before hitting a full stop. A series of chords brings Microstories to an end.

Ms. Shaw's unique work drew a very warm response from the audience; if only the composer had been present, so that we could express our appreciation for her imaginative, engrossing music.

Following the interval, the players gave us a fabulously rich-toned reading of Antonin Dvořák's String Quartet No. 13 in G-Major.

Dvořák brings an exceptionally wide palette of colours to this, his final work of chamber music. In addition, his remarkable gift for rhythmic variety - as always - captivated the audience tonight. A wonderfully attentive atmosphere filled Weill Hall as the abundance of Dvořák's themes provides each of the Miró's four artists with ample opportunities for expressiveness. The tone of the work is uplifting and sings of a positive outlook, which we can all savor in these uncertain times. Here, in addition to the warmth of the Miró Quartet's lower voices and the arching flights of the first violinist, we could enjoy the exceptional playing of the quartet's second violinist, Mr. Fedkenheuer, as both melodist and harmonizer.

The four movements of this quartet served up a veritable smörgåsbord of delights, so richly played by these incredibly generous musicians. All evening, the music felt so alive.

Called back by insistent applause, the musicians offered us a Yuletide treat: an arrangement of "Silent Night" by composer Joel Love. This was played with simple, heartfelt beauty.