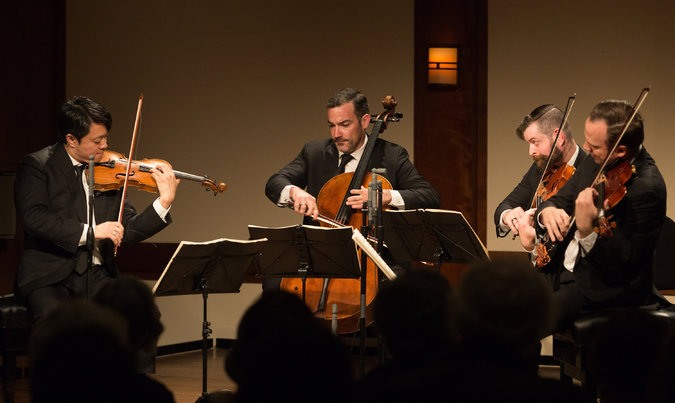 Absolute music is frequently linked to its creators' biographies, which is a perilous adventure, given how freely music can be created out of a variety of life experience while resting on a foundation of reliable technique and proven imagination.

Beethoven's sixteen string quartets limn roughly his familiar life trajectory, from new guy in town (Vienna) confirming his mastery through a middle period of recognized achievement on to hard-won surmounting of personal and professional challenges issuing in works that might justly be labeled perpetually avant-garde.

The Miro Quartet recently brought into the marketplace its mastery of the Beethoven quartets (Pentatone), and the eight-disc set has so many points of excellence that an immediate recommendation is called for here. An American ensemble named after the Spanish painter Joan Miro, the quartet is based in Austin, Texas, and recently visited Indianapolis under Ensemble Music Society auspices for a concert that foreign travel forced me to miss.

The quartet has essayed the complete cycle in concert several times, and the current box set uses versions of the first two Op. 18 quartets with original second violinist Sandy Yamamoto, succeeded in that chair by William Fedkenhauer, who is present for the remaining 14 works. Other members of the ensemble are Daniel Ching, first violin; John Largess, viola, and Joshua Gindele, cello. All the performances shine with well-honed unanimity of style and effect.

The main personality the Miro presents in these works is one of forceful clarity, including a unified way of representing phrases that vary in texture or dynamics but that otherwise echo or reaffirm phrases already heard. Unlike other recordings of this body of work known to me, the Miro is represented in a dry acoustical setting. The sacrifice in resonance is not great, but it allows for more direct communication of the music, it seems to me.

The acoustical choice puts a premium on intonation and blended quality of tone, which the members have under consistent control. There is a commendable avoidance of overindulgence in emotion. The verve of the fast music is always apt. Like everyone else, the Miro men revel in the exciting nonstop momentum in the finale of the third "Rasumovsky" quartet.

That music, always thrilling, induces something of a flashback with me, since I can never unsee how it was presented in a film about the Guraneri Quartet, with the camera circling the players to underscore the work's vertiginous energy. Stop the merry-go-round, I want to get off, I thought to myself at the time.What the Miro does with that movement seems just right, because the rhythmic acuity with which they dispatch the music renders the tempo somehow less dizzying.

Though the Miro Quartet sounds unanimous throughout these eight discs, I got the impression that the group's most representative player is the violist Largess (who wrote the package's program notes). His sound only stands out when it's supposed to, yet I found myself always listening for him with special attention. Largess' tone is lean, a little astringent, but not pinched. It was invariably refreshing.

To the degree that these qualities characterize the quartet, you might wonder how the players do in slow movements. I found nothing offhand or superficial in the performances of the often searing lyricism in these pieces. A test case for me is always the Cavatina, the deeply affecting slow movement in op. 130. The Miro is still itself, as it were, in the Cavatina, but none of the score's wrenching feeling is shortchanged. They never fail to project the spaciousness and intensity of Beethoven's emotional depths.

The range of expression in the quartets has made them attractive to all string quartets for a couple of centuries.
Like any quartet that is worthy of being heard in this music, the Miro catches the impact as well as the formal cohesiveness of the deathless works of the composer whose 250th birthday will be celebrated worldwide in the course of 2020. Given the structure of the classical-music economy, most music-lovers will be hearing one or more of the symphonies, as well as one of the five piano concertos plus the violin concerto. But you don't have to be a connoisseur or a livelong Beethoven fan to get loads of pleasure from the chamber music. And the Miro Quartet's survey of these sixteen great pieces ought to be included in everyone's home celebrations.