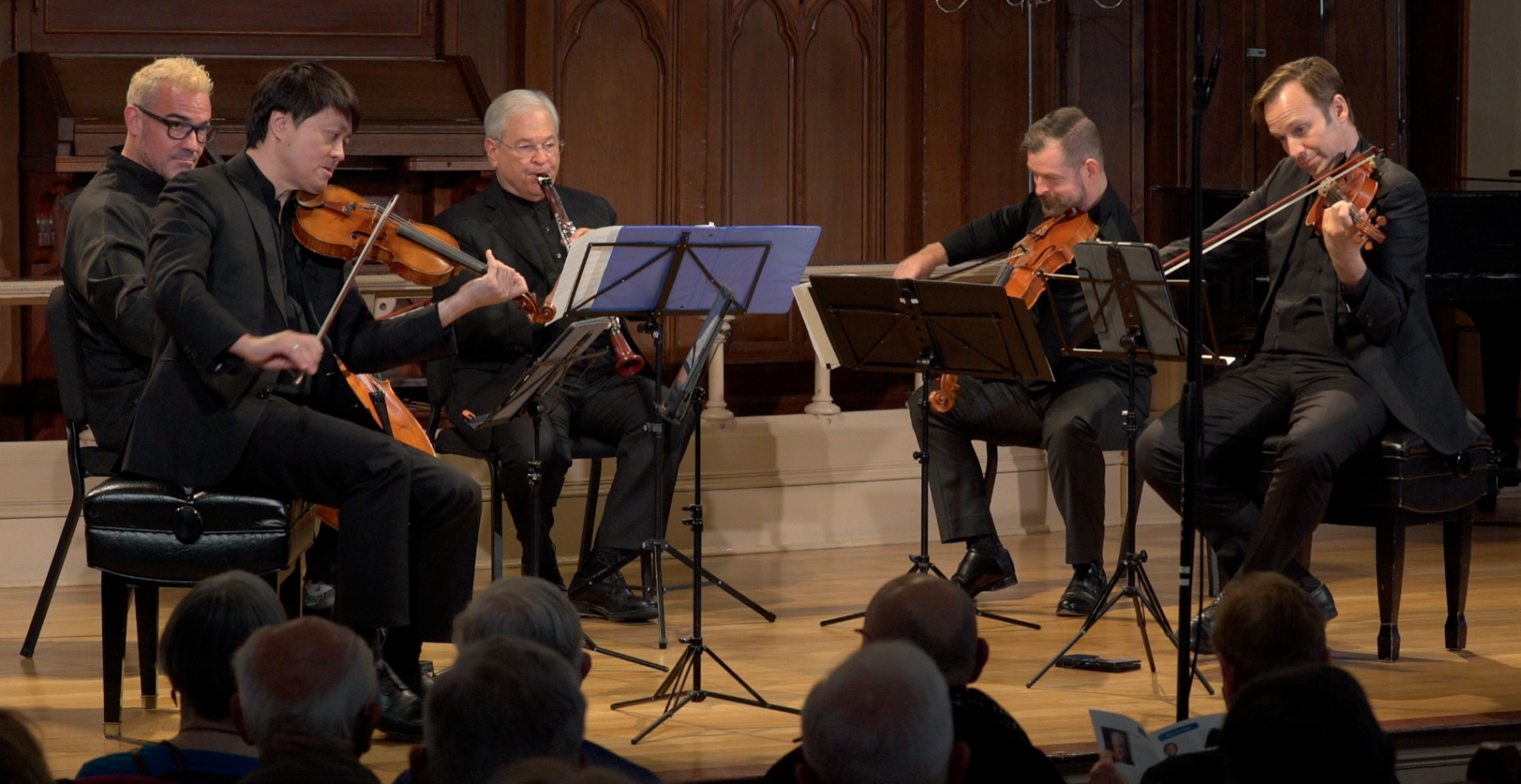 By Angela Allen for Oregon Artswatch. Photo by Invisible Harness.

It was almost all Shifrin and Schiff at Chamber Music Northwest’s “Rendezvous with Benny” on April 3 at Portland’s The Old Church.

The two Davids—David Shifrin, the master clarinetist and former artistic director of CMNW, and David Schiff, the Portland composer–are Goliaths at collaboration. They have been at it for 40 years, since they met in the early ‘80s at the beginning of Shifrin’s CMNW tenure and Schiff’s Reed College professorship.

Both are retired now from those jobs (Shifrin from CMNW in 2020 and Schiff from Reed in 2019), but not from making music together. Their first collaboration four decades ago was Schiff’s arrangement for quartet from Schiff’s opera, Gimpel the Fool. The most recent is Schiff’s “Homage to Benny”–as in Benny Goodman–written for Shifrin and performed by him and the Miró Quartet, yet another of the über-talented string ensembles CMNW has brought to Portland. The Austin, Texas-based Miró string players performed previously at The Old Church in 2020, a month before Covid got serious. This April’s concert marked one of their first times out since, and it was obvious they were glad to be swinging.

Schiff’s three-piece homage–which included Goodman’s “How Am I to Know,” “A Smooth One” and “Temptation Rag”–shows how Goodman earned his King of Swing title (with strings attached for this concert). The composition sustains Schiff’s national and Northwest reputation as one of the best arrangers and composers, swinging hard despite its easy grace, and though Shifrin carried the melody with his MoBa clarinet’s bell-like tone, the Miró musicians were happy to jump into jazz and wag their heads with the audience. Much of the audience, by the way, likely grew up with these mid-century tunes.

A Schiff-Goodman surprise arrived with the encore, for which Shifrin and the Mirós feigned the “not-one-more-piece” attitude as they returned to the stage. “Sing Sing Sing,” a raucous Schiff arrangement of the Goodman hit, stole the show, and believe me, it was planned.

Shifrin fell in love as a kid with Goodman, especially after he saw the mid-’50s movie The Benny Goodman Story starring Steve Allen as Goodman, with Goodman playing most of the music, except the early stuff, which Allen squeaked out because Goodman couldn’t remember how to play poorly. That movie pushed Shifrin, growing up in Queens, N.Y., to hit the musical ground running with a clarinet, while his friends wanted to run with Mickey Mantle.

All the work paid off, and Shifrin became a much lauded Avery Fisher prize-winner (awarded to outstanding soloists), CMNW and New York’s Chamber Music Society of Lincoln Center visionary leader, a major recording artist and performer, and a Yale music professor. As well, he has been instrumental in building the clarinet’s repertoire with numerous commissions.

Goodman composed scores of tunes for the clarinet, and many included classical works. He went on to play the “Clarinet Quintet in A major, K. 581” in Carnegie Hall, which was also the climax of the movie. This counted as a high achievement with the high-brow music that Benny Goodman’s wife Alice Hammond Goodman loved. And yes, Shifrin performed the same Mozart concerto at Carnegie Hall years after Goodman did.

So how could Shifrin not play the 30-minute signature classical clarinet piece with the Miró Quartet for the second half of the April 3 program? The group captured W.A. Mozart’s late-in-life expressions of joy. The clarinet ranged from effervescent, to silent, to soothing, to frenetic, to ultimately lyrical in this four-movement concerto that Mozart wrote two years before he died in 1791 in his mid-30s.

Two other pieces showcasing the clarinet filled out the program. The four-minute 1946 “Rendezvous for Clarinet and Strings” was written by cellist and mid-century composer Alan Shulman, also known for founding the Stuyvesant String Quartet with his brother, Sylvan. Shulman convinced Goodman to commission him to compose the piece in place of playing Mozart with him on Goodman’s radio show. It played over WEAF radio from New York in the summer of 1946 and opened the April 3 Portland concert. Shades of George Gershwin along with mid-century jazz brushed up with classical influences came and went throughout the music.

Peter Schickele–“P.D.Q. Bach”–composed the 2015 “Spring Forward for Clarinet and String Quartet,” a commission from Portlanders Carl and Margery Abbott through CMNW. The 23-minute, five-movement composition follows spring’s eager bloom and continues through a calmer summer. The music includes country fiddling, which the Miró musicians were thrilled to perform, and concludes with “A Perfect Picnic.” Schickele describes the last movement as inspired by “a perfect picnic my wife and I had at sunset on the Claremont Estate on the east side of the Hudson River,” according to the CMNW program notes. Shades of Aaron Copland and other mid-century and late-20th-century composers ran through the tuneful piece of many moods.

This performance was another big hit in a run of CMNW’s delightfully played, tightly orchestrated and beautifully curated concerts. Plus, it was a lot of fun.