Conrad Prebys – a modern-day Razumovsky | What if the Miró Quartet flopped? 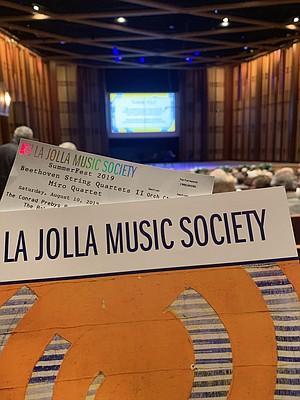 By Garrett Harris for the San Diego Reader

That joke was on my mind during Miró Quartet’s all Beethoven concert on Saturday, August 11, at the La Jolla Music Society Summerfest.

I should probably explain. During the Beethoven String Quartet Op. 135, cellist Joshua Gindele became “the interrupting cello.” The joke was created by Beethoven and expertly told by Gindele.

Within the context of the music the clearly cello interrupts the line of the other instruments and goes in another direction. Gindele pulled this musical phrase off with an attack for the ages as a sly grin crept across his face, emphasizing the comedic quality of Beethoven’s music.

It might not sound like much but it is a moment I will never forget. Not only was it an insightful moment into the personality of Beethoven’s music, it was entertaining. That’s one word we could use more of in the concert hall.

It is instances such as this which make attending concerts a rich and rewarding activity.

I will admit that I wore a thin coat of trepidation as I entered the concert. You see, I had interviewed and gotten to know the Miró Quartet earlier in the week and I enjoyed the process.

What if their concert didn’t come off? What if, gasp, I didn’t like it?

Lucky for me, the Miró Quartet is an ensemble composed of impeccable musicians who allow their own unique personalities to exist within their performance.

Andrey Razumovksy was the Russian court ambassador to Vienna. He supported Beethoven’s career to such an extent that not only are the three Opus 59 Quartets dedicated to him, Beethoven’s Symphonies Nos. 5 and 6 are too.

The reason we care is that we need all the Razumovsky’s we can get in the arts and this concert was presented in a center named for a modern-day Razumovsky named Conrad Prebys, may he rest in peace.

This was the first time I had been in the audience at the Conrad. The concert was in the Baker-Baum Concert Hall at the Conrad. I found the acoustic to be accurate. My personal preference is for a “wet acoustic” which allows the sound to ring in the hall but I thoroughly enjoyed the concert experience at the Conrad, especially with The Miró Quartet playing.