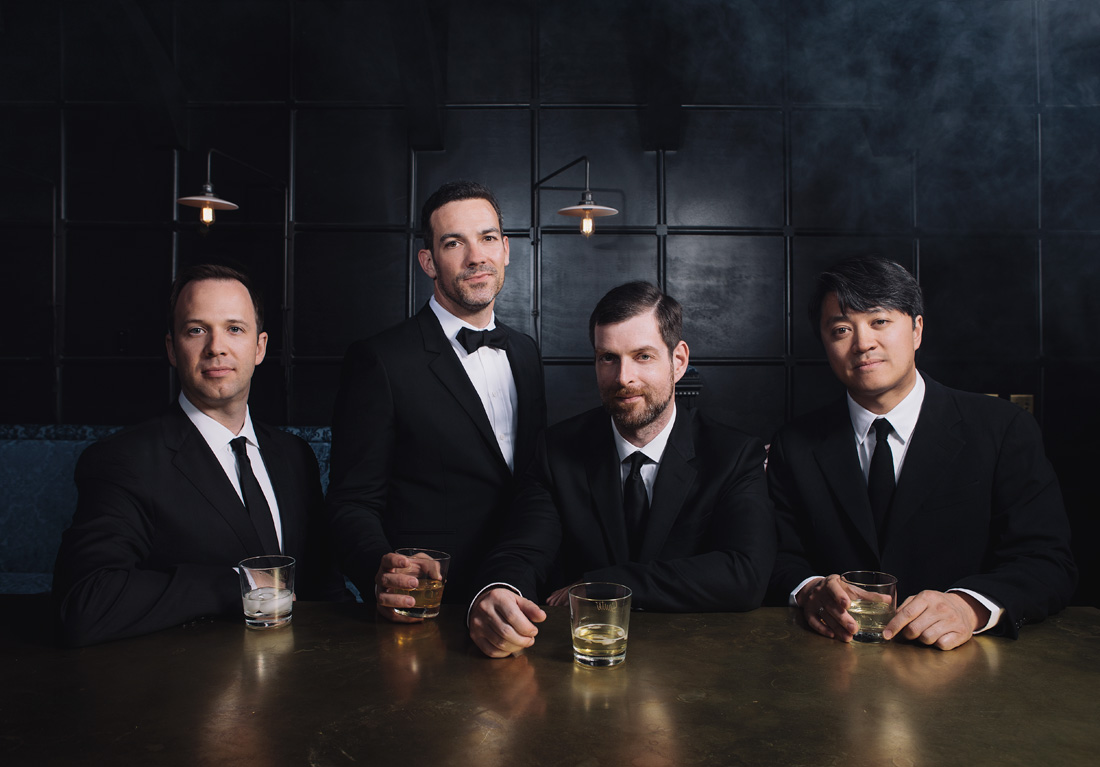 Sunday March 18th, 2018 - In this, the second in Chamber Music Society of Lincoln Center's Winter Festival offerings, the Miró Quartet were joined by a mirroring quartet of string players culled from the Society's eminent roster. This confluence gave us the happy opportunity to hear Louis Spohr's Double Quartet #1.

In this CMS Winter Festival, the pioneering spirit of Ignaz Schuppenzigh - the 'father of the chamber music series' - is being honored. Schuppenzigh, friend and champion of Beethoven, originated a chamber music series in Vienna that presented over a hundred concerts between 1823 and 1828. Works of Haydn, Mozart, and Beethoven dominated the repertoire at these presentations. Schuppenzigh's ideas about programming, and his knack for gathering top musicians of the day together to play, served as a template for chamber music presenters thru the ensuing decades.

For their Festival, Chamber Music Society have duplicated the actual bill of fare of four of Schuppenzigh's programs: this evening we heard the same works that he presented in a concert that took place on January 23rd, 1825.

Joseph Haydn's six “Apponyi” quartets (Ops 71 and 74) were written in 1792 & 1793, between the composer's two extended visits to London. Prince Nicholas Esterházy, Haydn’s patron, had died in 1790; his successor, Prince Anton, did not care for music. The Esterházy Orchestra was disbanded, but the new Prince kept Haydn on the payroll.  With more free time from composing, Haydn traveled to London where he stayed for a year. On returning to Eisenstadt, he was commissioned for a set of string quartets by one Count Apponyi; it was one of these - the Quartet in E-flat major for Strings, Hob. III:71, Op. 71, No. 3 - with which the Miró Quartet opened today's concert.

From their opening regal chord, the Miró displayed their rich and vibrant sound, wonderfully balanced and with an impressive finesse of dynamics. The players were arranged with the violinists facing one another and the cello and viola holding the center. This worked out well, especially when the viola and cello passed a theme back and forth during the opening Vivace. Violinist Daniel Ching's remarkably fluent playing of the swift passages kept everything percolating nicely.

Thanks to several appealing performances of Haydn's works in recent seasons at CMS concerts, the composer's music is slowing winning me over. I was truly enjoying the lovely, pensive song that sets the Andante con moto on its way, and savouring the pliant beauty of John Largess's viola and some very fanciful filigree from Mr. Ching's violin, when suddenly the playing stopped: William Fedkenheuer's violin had a broken string.

He hastily walked offstage to have things set to rights, whilst Mr. Largess stepped forward and regaled us with a funny story about a string-break disaster the Quartet experienced early on in their career while playing in a competition. Mr. Largess is a great story-teller and had the crowd laughing aloud. Mr. Fedkenheuer returned just as Mr. Largess finished his tale: despite the incident, the Miró had won the competition.

The quartet re-started the Andante from the top, and after only a few measures, order was restored and everything flowed on as if nothing had happened. A rich cello theme from Joshua Grindele sounded, and then a passage of delicate, Mendelssohnian "fairy music" sprang up, as delightful as it was unexpected. The Andante closes with a brief coda.

Following a charming Menuetto, the final Vivace is gently animated, with the music slipping from major to minor and back. After a pause, there's a skittering motif and an increase in velocity; then, after another bit of a lull, the music courses on to a lively finish.

Louis Spohr's Double Quartet #1 in D-minor, opus 65, dates from 1823. It was a novelty when first played, and Spohr apparently hoped that other composers might take up the double quartet banner; instead, they continued to produce hundreds of string quartets, with an occasional octet thrown in. At its earliest hearings, the Spohr Double Quartet #1 was felt to feature a too-prominent and showy role for the first violin. I doubt very much that anyone at Alice Tully Hall tonight would have had any such complaint, as violinist Kristin Lee gave a sterling performance, reveling in the demands Spohr placed on her.

The two quartets - the Miró and the ad hoc CMS group - were arrayed across the Tully Hall stage this evening, with Ms. Lee and Mr. Ching facing one another at a distance. Any potential concerns about  communication were immediately dismissed; the performance was beautifully integrated and seamless.

The Double Quartet's opening tutti passage immediately declared an opulent density of sound. Ms. Lee and  Gary Hoffman conversed - violin to cello - and Ms. Lee's part grew quite virtuosic early on, including a lovely solo bit (one of many). Rising scale motifs were passed about, and Mr. Hoffman's cello was an abiding presence. Then the Miró took up some artful plucking, with the endearing dusky rose perfume of Mark Holloway's viola drawing me in. Ms. Lee's violin soars to the heights; the music is so melodious and inviting. The opening Allegro reaches a calm finish.

Ms. Lee leads off the sprightly Scherzo with its dancelike rhythm. After an interlude, a da capo glides smoothly along to the end. A tranquil rocking motif underscores the Larghetto, with Mr. Hoffman's cello prominent. The music darkens a bit to minor before modulating back, with the cello again to the fore. Mr. Hoffman then switches gears for some fanciful figurature to the set the Finale: Allegro molto on its way. Rising motifs in a rich sonic mix, as well as some delightful tremelos, move the work to a joyous end.

Following the interval, the Miró's violist, John Largess, joined Cho-Liang Lin, Ms. Lee, and Mssrs Holloway and Hoffman for a deeply satisfying performance of Beethoven's Quintet in C major for Two Violins, Two Violas, and Cello, Op. 29. Composed in 1801, this piece is alive with all of Beethoven's full-blooming mastery. The audience reportedly loved it at its premiere; and that love has held on, right down to this evening's marvelous rendering.

In the opening Allegro, Mr. Lin's appealing mix of subtlety and yearning set the violin part in high relief, his upper register sweet, with finely-tapered notes. As a counterpoise, Mr. Hoffman's depth of tone was full of poetry.

A lovely, fragrant melody commences the Adagio molto espressive - the heart of the quintet - with Mr. Largess's pulsing viola and some nice, buzzy trills from Mr. Hoffman. Mr. Lin's minor-key theme over a rather trudging rhythm gives way to a 'mandolinata' quartet played over Ms. Lee's plucking. The rocking of the violas allures, the violins entwine, the cello resonates. A sudden onset of turbulence heralds a violin duet, the cello in a rising and falling pattern. Single spaced notes draw us on to a quiet end.

The Scherzo, sometimes thought to forecast that of the great 9th symphony, leads to the concluding Presto. Fast tremelos and quick violin solos surrender briefly to a rolling motif. There's a start-and-stop feeling in play; then the themes rebound, more emphatic and dramatic. The quintet finishes with a brilliant coda.