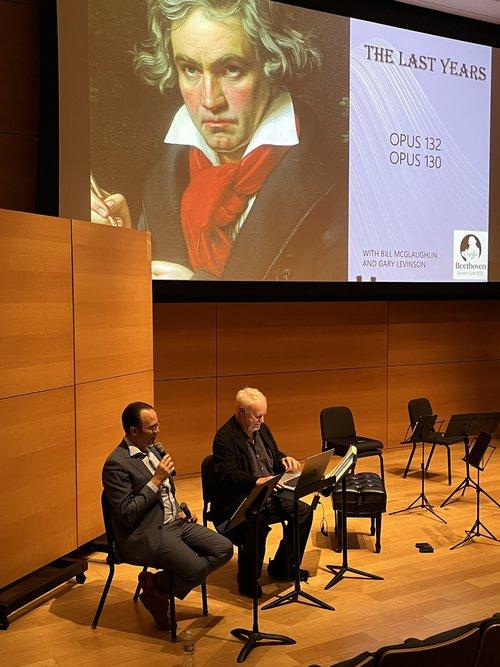 When he walked onstage, William Fedkenheuer, second violinist with the Miró String Quartet, looked out at the audience and intoned: “Well…here we are.” He said it with a sense of pride, tinged with a touch of exhaustion. This was the final session of the Chamber Music Society of Fort Worth’s presentation of all sixteen of Beethoven’s String Quartets—five concerts played over the course of a single week.

Other top-rated string quartets have climbed this musical Mt. Everest, both live and on recordings. But this was an opportunity for Fort Worth-Dallas audiences to experience—in person—this journey through the Master’s musical development. It was a commitment of time and travel on their part, but audiences seemed energized by the concerts: —each received an impressive and grateful ovation. The intermission conversations were animated, and even the various musical cognoscenti in the audience were impressed and enlightened.

In summary, we started in the early 1800s by exploring Beethoven’s Haydn-esque Classical-era roots, entered the dark thicket of the romanticism emerging around him in middle age, and came out into the less complex sunshine of the quartets written in his last years.

The final concert opened with Beethoven’s String Quartet No. 14 in C-sharp minor, Op. 131 (1826). The quartet is written in the rarely used key black-key-replete of C# major. (He starts in C# minor but ends in C# major.) Musical keys have individualistic moods, and composers use them to convey very different feelings. While D Major is a key of celebration, C# minor is one of penitence and disappointment in love and life. When a composer talks to God, it is usually in C# minor. It is not surprising that Beethoven chose this particular key. At the time, his life was beset with insurmountable troubles. His nephew, to whom he acted as a surrogate father, attempted suicide, not to mention that he was totally deaf. By ending the work in C# major, Beethoven at least implies a tight smilef.

Opus 131 lists an imposing list of five movements: Allegro moderato-Adagio; Andante ma non troppo e molto cantabile; Presto; Adagio quasi un poco andante (a seris of seven variations); and Allegro. Yet the quartet flies by, and never feels as long as that list might imply. Some of the movements are short; the entire piece is played without a pause—and the character of the music is constantly changing.

The glory of opus 131 is that it displays the composer’s ability to present a musical smorgasbord of interrelated musical concepts. This makes it a natural for the ever-inventive Miró quartet. Over the last week, we have heard them make dramatic stylistic reversals and sharp dynamic contrasts, and insert surprising stentorian chords with ease.

Hearing opus 131, it is possible to infer that there is an underlining religious, or at least spiritual, aspect of the quartet. Some of the thematic material that appears in the second movement is reminiscent of Beethoven’s Missa Solemnis, opus 123. In any event, this quartet unfolds in its own time; in his program notes on the piece, violist John Largess writes that Opus 131 (his personal favorite of the 16), is like “a mysterious vision of another universe.”

The second quartet on the program was the String Quartet No. 16 in F Major, Op. 135. This was the last work Beethoven completed (except for the brief finale he wrote to replace the Grosse Fugue—the closing piece of the concert series) before his death in the spring of 1827.

Beethoven’s rebellious nephew Karl was always a heartache for the composer. Upon the death of the boy’s father, who was Beethoven’s brother, the composer took over guardianship. Over the remainder of his life, a nasty and protracted battle with the boy’s mother, his sister-in-law, raged on. Beethoven found her to be immoral and unfit to raise the boy. The whole sorry saga is the stuff of page-turner legal novels.

Adding to the quandary, Karl was frequently in trouble, tossed out of a number of private schools, and even attempted suicide. In the midst of these ongoing troubles, Beethoven wrote Opus 135. Other than the Allegro “Finale” he wrote to replace the troublesome Grosse Fuge, Op. 135, this was Beethoven’s last composition.

Considering the dire circumstances, the character of this quartet is surprising. Instead of his previous brooding profundity and complexity, this music has a sense of the composer being “freed” to write something light and enjoyable. It is a return to his Haydn-esque roots while applying everything he’s learned since then. One wag said that Opus 135 is the quartet Beethoven might have written at the very beginning—if he’d had all of the lessons handy that he had learned along the way.

In writing this final work, Beethoven probably never considered that his quartets would be presented in a series such as this one. But Opus 135 offered the Miró Quartet the opportunity to end the series with a smile.

And so they did.

The first movement is simplified to the point of austerity. Even the sonata form (exposition, development, recapitulation) is condensed. The Miró played it almost as a game between friends, tossing bits of melody back and forth. It’s been suggested, in fact, that perhaps this was the way the composer assembled his masterworks. Did he find a few catchy pitches, write them down in his notebooks, and then toss them around until they took shape in his mind and found a location?

A fleet scherzo follows and continues to spotlight Beethoven’s love of humor. He starts off by confusing the measure structure, moving the accents to create false downbeats. Loud unisons, momentary interruptions, odd pauses, inserted and exaggerated pizzicato passages, sudden transpositions and reversals, dynamic contrasts, and false endings abound. The Miró could have had more fun playing this movement, but Beethoven’s wink and nod came through.

The third movement is a quiet retreat from all the levity, and is one of Beethoven’s loveliest creations. Above it on the manuscript, he wrote the indecisive statement “Süsser Ruhegesang oder Friedengesang” (Sweet song of tranquility or song of peace). The Miró gave it a lush but straightforward performance as if to say pause here, and revel in the master’s abilities.

Beethoven begins the last movement with a statement written in words: Der schwer gefasste Entschuss. (The hard to make or difficult question.) Then, in a single line of music he asks a question and offers an answer: Muss es sein? Es muss sein! (Must it be? It must be!) —complete with the question mark and exclamation point.

Musicologists (and a filmmaker or two) have puzzled over this message, and a number of books and erudite tomes have addressed it. The question is: what does it mean and why did Beethoven put it there? The quartet makes use of the two notated motives, but that doesn’t help us to solve the puzzle. However he meant it, the music itself shows little hint of a heavy existential discussion in its introduction, and the composer swiftly ftakes a lighter approach.

The curious motto above the score has been a puzzle down the generations. Perhaps, as Beethoven knew or sensed he was nearing the end, he was expressing a mixed sense of fulfillment, completion, even resignation as he reviewed his life’s accomplishments and failures. With a small smile, perhaps thinking of music unwritten, he pens: “Must it be? It must be!”