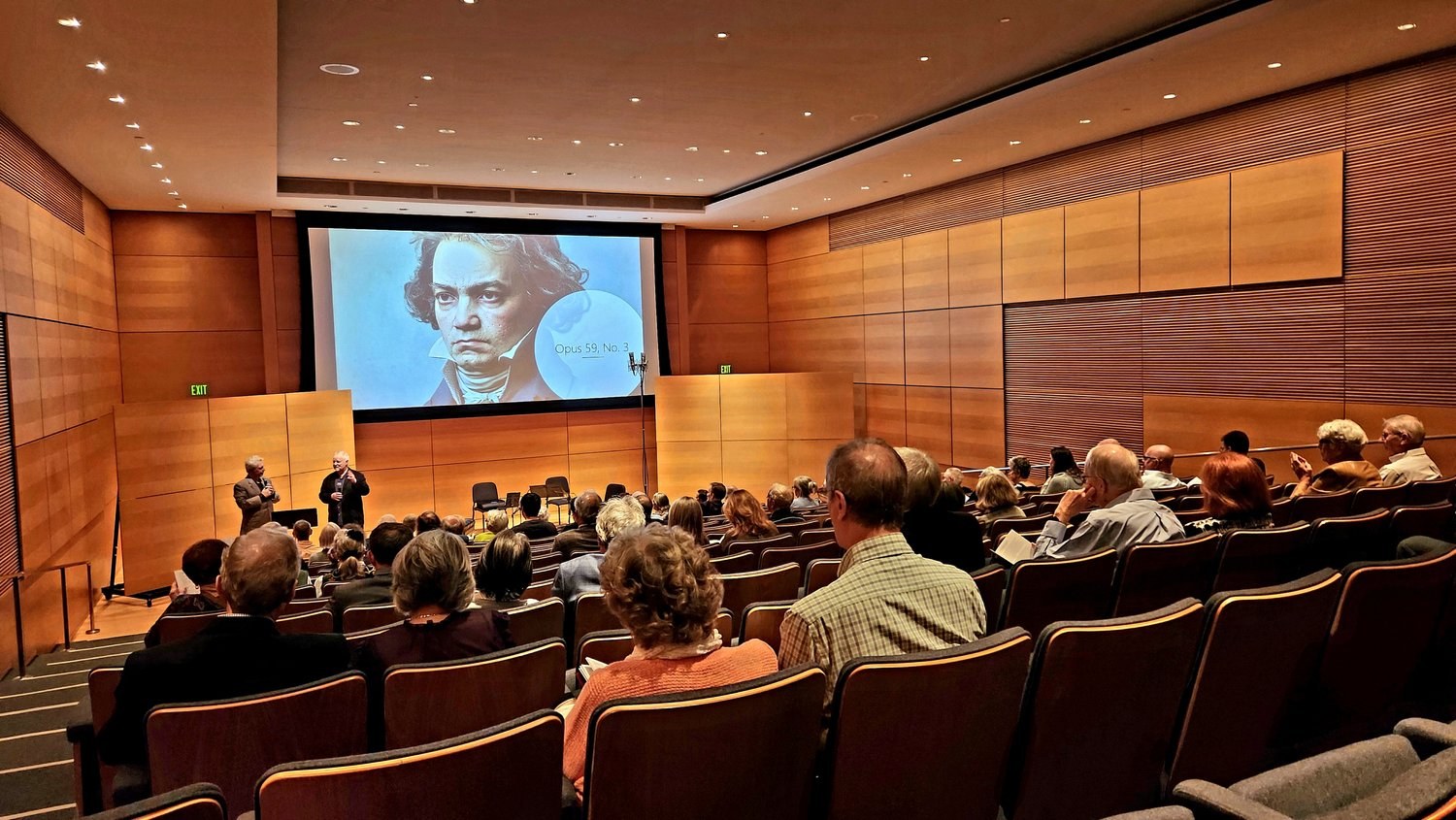 The third of the Beethoven Quartet Cycle concerts was performed on Thursday evening in the hall of the Modern Art Museum of Fort Worth—the evening beginning with a pre-concert chat from Bill McGlaughlin, whose radio show “Exploring Music” is famous among classical music fans around the U.S. and abroad.

Right from the first note, we realize that Beethoven has musically jumped way ahead. These three quartets form the start of his “Middle Period.” Leaving the influence of Haydn et al. behind, he embarks on his plucky but perilous passage to what would become the widely popular school of romanticism in all of the arts.

An aside: This review centers less on the actual performances than usual. But this cycle format gives me the opportunity to include a wealth of highly geeky information. Hopefully, it will allow you to better comprehend how the Miró quartet’s amazing performances reveal Beethoven's innovations to the audience.

The quartets in this third concert were commissioned by Count (later promoted to Prince) Andrey Kirillovich Razumovsky (1752 – 1836). He was a Russian diplomat who spent most of his time in Vienna—and also an accomplished violinist and major supporter of the arts. It is reported that he played the second violin in the premieres of “his” quartets.

Even though Razumovsky was rich, valued by the government, and socially prominent, none of that mattered as far as history goes. It was his commissioning of these three string quartets that gave him a place in perpetuity. Without them, mention of his name would have elicited a resounding “Who?”

Another aside (bear with me): The “Razumovsky lesson” is that commissioning composers to write new compositions constitutes a consequential contribution to the culture of the world. It doesn’t need to be expensive to accomplish and can be designated for a particular performer or occasion—from the dedication of a new church to a song for a wedding or other event. Most importantly, a commission may be just the support a composer needs to survive history’s cruel sifting.

The String Quartet No. 10 in E-flat Major, op. 74 opened Thursday’s program. Notice that starting with these quartets, Beethoven no longer wrote them in sets such as he did for opus 18. Now, each quartet has its own opus number, but it also has a number that reflects the time of its composition. So, this is the 10th string quartet in his canon, but it is also the 74th opus number in his published catalog.

But … It also has another designation. It is nicknamed the “Harp Quartet”—though not by Beethoven. His publisher tacked on the moniker to make it more memorable to the buying public. This name came from a series of harp-like pizzicato arpeggios that start in the cello, move through the viola, and then are handed off to violin II.

Right from the first notes of this quartet, we realize that Beethoven has turned the next historical page, with the musical world of his opus 18 efforts firmly in the rearview mirror. You can look at the printed page to understand. Rather than a more usual dynamic marking of p (piano, or soft), this quartet opens with a marking of sotto voce, translated as “under the voice” but is usually meant to mean “whispered.” Wow! Beethoven is giving the players a descriptive dynamic instruction that implies the kind of soft sound he wanted.

This Adagio introduction has a few other unusual quirks that hint to the savvy listener that Beethoven has leaped forward. First of all, this introduction is only a mood-setter, and is otherwise not related musically or otherwise to the rest of the piece. Also, this unusual introduction has moved way past Haydn’s conservative harmonic palette and even Mozart’s further expansions. We are only minutes into Opus 10, but it is patently obvious that Beethoven is transitioning into his mature style.

All this detail was brought to mind by hearing the Miró Quartet play these opening measures with a liquid, placid, and solemn musical style. This perfectly set up Beethoven’s first humorous surprise—a sudden loud double-stopped chord on beat 3.

All this innovation presented, and we are in only the 15th measure! Perhaps he was thinking he would wake up anyone in the audience who thought they could sleep through the performance. Beethoven also was announcing that, as advanced as he already was at the time, he would always be full of surprises and musical humor.

After pulling off this bit of Beethoviana, the Miró Quartet proceeded to build the movement, within the first 10 minutes or so, to quite an impassioned climax. This build-and-retreat pattern continued to be excellently layered throughout the entire movement.

Further, Beethoven’s quest to expand the form into a quasi-orchestral sound also starts right here in #10. While his earlier quartets revealed his gift of independent voice leading, he now expands that technique in a most dramatic and effective manner. Sometimes, three lines form a concerto-like accompaniment to Violin I’s virtuosity. Other times, the complexity of his fugal writing, and the clarity of the Miró’s playing, gives the impression that there are many more players than just the four we see onstage. He uses pizzicato passages to sound like a piece for guitar and violin. And so on.

The effectiveness of this music is certainly dependent on the quality of the players; it would not come off as the composer intended without careful analysis—through serious study of the score and hours of painstaking organizational rehearsal. The musicians must decide in detail what each line’s purpose is, and how it “fits” into the dynamic hierarchy. Frequently, the four players might be playing on four different dynamic levels at the same time (rarely used in the past).

On Thursday, we were gifted with a vivid experience of Beethoven’s musical growth; the Miró was flawless in demonstrating all of his remarkable innovations, while still delivering an exceptional musical performance.

Yet more geekiness: One of the secrets of a finely matched quartet is the sound of the individual instruments and the player’s technique. The resonances of these instruments should be close, because of balance for one thing. But herein lies the rub. instruments that are too well-matched over-blends the individualistic color. However magnificent they may be, they are not easy to differentiate in the more choral sections.

A good example of the problems inherent in this over-matching is the sound of the Tokyo Quartet. The Nippon Music Foundation owns a group of Stradivarius instruments once owned by the definitive virtuoso violinist Niccolò Paganini. They are permanently on loan to the Tokyo String Quartet. While the individual instruments are glorious, other than from range they are hard to pick out of the ensemble. Other quartets have the opposite situation: instruments that sound so completely different, a real blend is an elusive goal.

The Miró uses superb instruments that are complementary, yet individualistic enough that we can easily differentiate them. Saturday’s review for Onstage NTX will give a complete list of the instruments and bows the members of the Miró use in concerts.