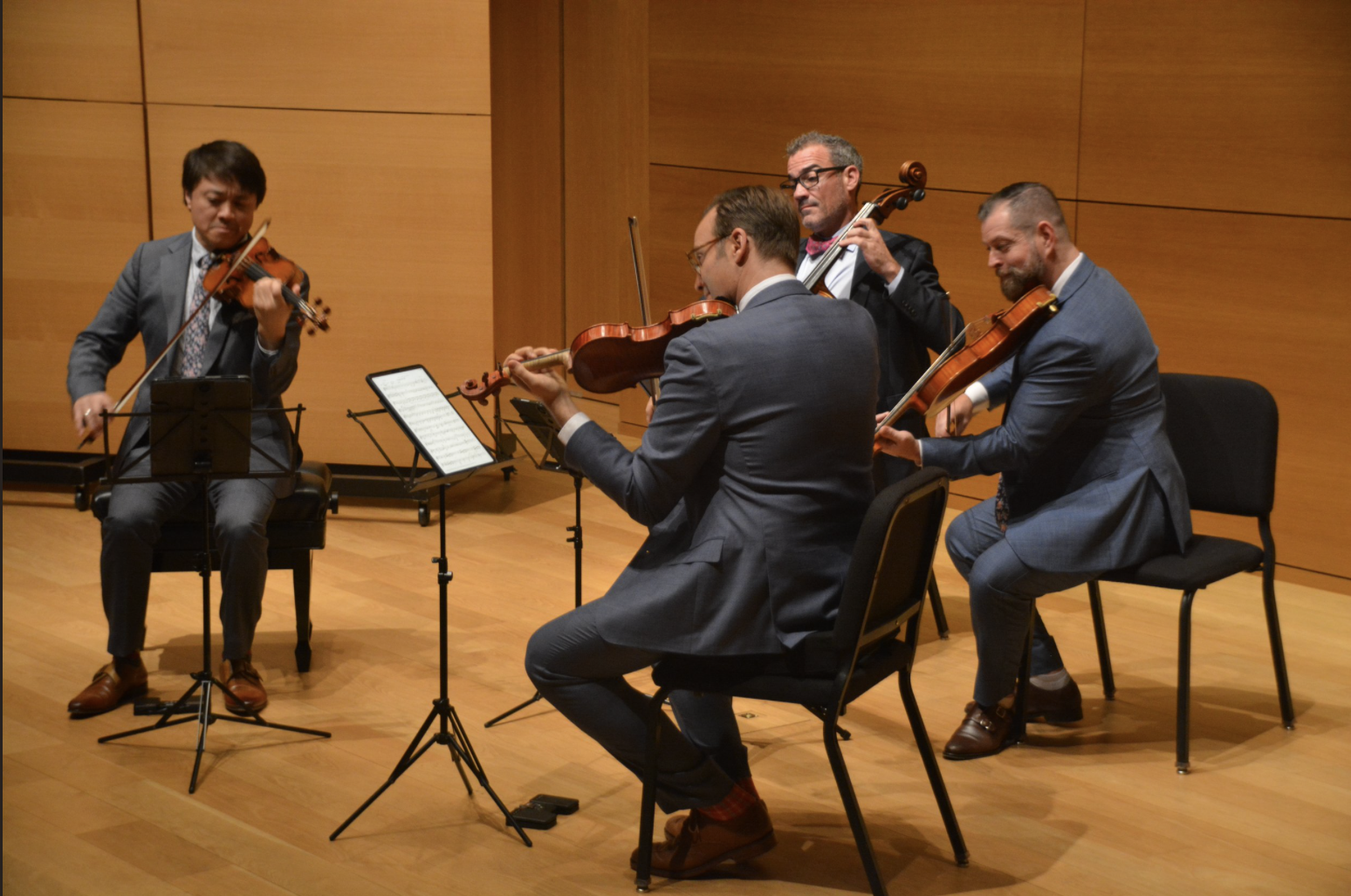 On Monday evening (November 7), the Chamber Music Society of Fort Worth began the Beethoven Quartet Cycle, giving us a rare opportunity to hear all 16 of Beethoven’s string quartets played together over the span of a week. The highly distinguished Austin-based Miró Quartet will pick up the challenge of playing them all in Fort Worth in the city’s Modern Art Museum. Audiences will be whisked along on a musical marathon through Beethoven’s life, as he revealed it to the world with these remarkable string quartets.

The rosined-runners in the Miró’s musical marathon are Daniel Ching, violin; William Fedkenheuer, violin; John Largess, viola: and Joshua Gindele, cello. Officially, they are the Faculty Quartet-in-Residence at the University of Texas in Austin and are considered to be one of the best such ensembles playing today.

And now, a little background:

It is a generally accepted truism that the string quartet is one of the most difficult compositional assignments in Western music. This is because of the challenge of writing four independent voices that combine to make a whole. The quartet form was very popular from its inception. In the days before public concerts, a small group of friends or family could train its members on the four instruments and produce an enjoyable evening of music-making. Haydn started the trend, and Mozart elevated the quartet to sublime levels. However, as in all other musical forms he addressed, it was Beethoven who transformed the quartet into transcendental and deeply personal works.

Beethoven waited to approach the quartet form until he felt ready. When the first group (Opus 18) was written, he was a wild young hotshot pianist and composer. He wrote a second tranche in his late thirties, reaching a new level of maturity. But it was in the final group of five quartets, written when the composer was profoundly deaf, that he transcended the mortal world of sound—unbound, as it were, from the limits imposed by human ears.

Resolving this conundrum for the audience was simple. This series of concerts presents the early quartets in the order in which they were written, regardless of when they were published. So, Monday evening’s opening event started out with Opus 18, No. 3.

Here is the bonus: Before each concert, there is a symposium about what will be presented by two brilliant, well-known, clever, and congenial musicians. One is Gary Levinson, artistic director of the CMSFW and Senior Principal Associate Concertmaster of the Dallas Symphony Orchestra. The other commentator, Bill McGlaughlin, is widely familiar to audiences from his syndicated radio broadcast “Exploring Music.” This addictive program is broadcast to hundreds of domestic and international markets (and is heard locally on WRR). But there’s more: he also is a trombonist, a renowned conductor, a music director, a writer, and an oft-commissioned composer.

Before the Monday evening concert, this dynamic duo presented a wealth of information in a jocular and engaging manner. (This pre-concert presentation alone is worth the ticket price.)

Now (finally), to the concert itself.

First up was Beethoven’s String Quartet No. 3 in D Major, Op. 18 (1798-1800). Remember that although it was written first, it was published as #3. It opens with an interval that is not used all that much melodically—the major seventh. It is a haunting and heart-rending interval that vainly leaps up aiming at the octave but, like Sisyphus, just misses the summit and has to retreat. You might know this interval from Bernstein’s West Side Story, where he uses it to express just such a near miss in the song “There’s a place for us.”

The overall mood of Opus 18 No. 3 is congenial and bright. The slow movement adds a reflective moment. The Scherzo is modest by Beethovenian standards, considering the astral heights he will reach in his scherzo movements in the years ahead. He uses folk dance rhythms with an off-beat kick and a hint of Roma (Gypsy) music in the trio. The finale shows one important aspect of Beethoven’s music that is too often ignored—humor. Most of the composer’s music is filled with sly winks and it is here that the Miró’s performance falters.

Here is a short list of a few of the “winks” in the movement, all played way too seriously: 1) The main theme is reminiscent of the “Mexican Hat Dance.” 2) It tries to be a rondo but can’t seem to get that together. 3) Off beats take great pleasure in stumbling over the meter. 4) At one point, Beethoven scatters a short motive between all the players like pieces of an unassembled puzzle. He repeats this at the end but leaves them scattered on the floor.

Their performance was technically secure, but called for more seasoning with some sniggers.

String Quartet No. 2 in G Major, Op. 18 (1798-1800) followed. This is, in general, a happy piece. It opens softly with an elegant flourish reminiscent of a formal bow of greeting. This is followed by a double-dotted, descending, and almost self-conscious motive, as if the earlier bow might have been overdone. This opening phrase has earned the work the nickname of Komplimentier-Quartett, (a quartet of bows and curtseys). One of Haydn's last string quartets, written at the same time, was also nicknamed the Komplimentier-Quartett.

The moderately melancholy and measured slow movement could have been played in a more operatic manner. Beethoven surprises us with a brief but energetic scherzo insert (like a copyist’s error). For a more dramatic effect, it should sound more foreign and “dropped in” to its surroundings. However, the Miró gave the finale a most delicious performance. It was appropriately rough and tumble, with fugal romps interspersed with sudden seemingly unrelated quiet moments.

Like a rocket launch countdown ( 3-2-1-blast off!), we arrived at #1—the String Quartet No. 1 in F Major, Op. 18 (1798-1800). What is exceptional about this quartet is that the slow movement is a piece of program music based on the tomb scene in Romeo and Juliet by William Shakespeare. To underline this, before publication Beethoven changed the tempo marking from Adagio molto (very slow) to the more romantic Adagio affettuoso ed appassionato (slow with tenderness and great passion). The Miró performance of this movement was the highlight of the first half.

After intermission, the program reopened with String Quartet No. 5 in A Major, Op. 18 (1798-1800). This quartet is modeled on one in the same key by Mozart. Beyond the key, however, they have little else in common. In the first movement, Beethoven roughs up Mozart’s more elegant model: dynamic contrasts, dramatic pauses, canonically echoed passages, crashing chords that meekly retreat, and showy ornamental passages abound.

The Menuetto is more Mozartian, with a swing in its step. It also uses Beethoven’s well-known penchant for dramatic silences and off-beat rhythms. The Miró’s performance could have made more out of all of this folderol, but got the gist.

Beethoven loved to write variations and would improvise them at the piano for hours. Hence, a theme-and-variations movement is not much of a surprise. Beethoven starts out in hymn-like fashion, but soon launches some spectacular explosions and dramatic contrasts of tempo and musical intent.

The finale is a movement that allows, or should allow, the performers to demonstrate their individual musical inclinations. While it is the most Mozartian of the entire series it can also be played with a Beethovenian dramatic and mercurial push inserting itself here and there. However, the Miró appeared to allow each of the players to decide for themselves on how the Mozart/Beethoven elements were to be distributed. It was effective, so perhaps a common agreement is not required.

The String Quartet No. 4 in C minor, Op. 18 (1798-1800) followed. The Miró delivered a passionate opening punctuated by dramatic chords. However, their casual approach to special dynamic markings was noticeable here. For example, the forte piano marking (fp) requires a sudden instantaneous change from loud to soft, and that sharp dynamic drop-off was missing. Likewise, its sister marking (sfp) (Sforzando to piano) requires an even more sudden loud to soft execution—like a bee sting. Both were too casually observed to achieve the full effect.

The String Quartet Opus 18 No. 6 in B-flat Major (1798-1800) ended the evening in a very appropriate manner. This quartet is a Janus of a work. It looks back over the stylistic developments heard in the earlier quartets, and forward to the astounding innovations yet to come. And if #5 was an hommage to Mozart, #6 is one to his other great influencer, “Papa” Haydn.

The advances of Beethoven's style start here. He begins by enriching his harmonic language and musical innovations. For example, rather than a big ending, he fades away movement to a few almost inaudible pizzicato notes.

In the Scherzo, Beethoven the musical comic makes another appearance. He plays with contrasts for humorous effect. Syncopation and other rhythmic trickery trade off with gigantic dynamic changes. Voicing separates the players into opposing teams, and its sudden ending is like flipping the on-off switch.

The last movement is a peek into the future of Beethoven’s mature style. It is in two contrasting parts. The slow mournful opening, entitled “La Malinconia,” is melancholy indeed. A tearful and insistent cello drives the inconclusive harmonic language forward. However, once again Miró’s casual observance of sudden dynamic changes blunted the effect.

The final bouncy section, set up by a huge ritard, led to a fermata that launched the final prestissimo scamper, bringing both the quartet and the evening to an energetic close.