Beethoven for Four, in All Its Glory 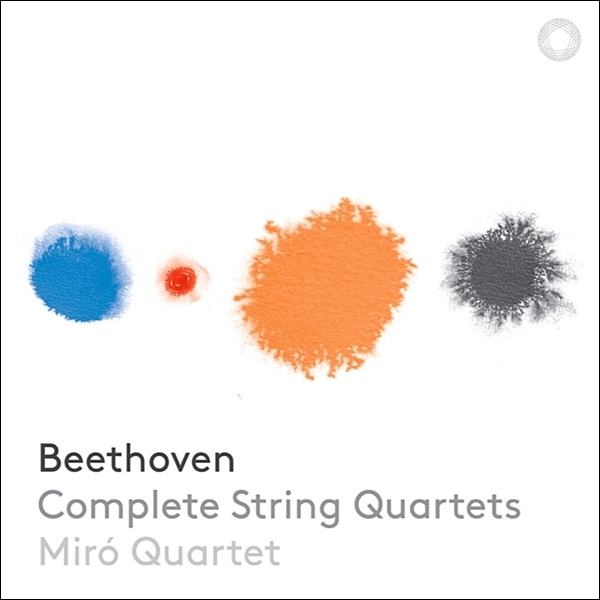 By Jason Victor Serinus for Stereophile

As the 250th anniversary of the birth of Ludwig van Beethoven approaches, artists worldwide have begun issuing complete recordings of his oeuvre. At the top of a fast-growing list, three stand out: Andris Nelsons' recording of Beethoven's nine symphonies with the Wiener Philarmoniker (Decca), Igor Levit's issue of Beethoven's Complete Piano Sonatas (Sony), and the subject of this review, the Miró Quartet's 8-CD set of Beethoven's Complete String Quartets (Pentatone PTC5186827). Amazon declares that the CDs won't be available in the U.S. until November 15, but you can already download them the files in either Red Book or hi-rez file format (24/88.2 or 24/96), complete with liner notes, from Pentatone's own website itself.

I first heard the Miró Quartet perform at one of America's great chamber music festivals, Northern California's Music@Menlo, when they were quartet-in-residence. Currently based at the University of Texas at Austin's Butler School of Music , the Mirós frequently travel up and down the West Coast, including to Seattle (where the bulk of these Beethoven's quartets were recorded) and my sweet little town of Port Townsend. They also make extended appearances in a remarkable documentary, The Bowmakers, whose exploration of the five famous string instrument bowmakers of Port Townsend is poised to make the rounds of performing arts and film venues in the next few years.

Few composers have managed to convey the range of human emotions, from despair to triumph and exaltation, with the totality that defines Beethoven's genius. Even at its darkest moments, the harmony at the core of his writing transcends the immediate to embrace the infinite. You can hear this in the Miró Quartet's performance of one of his final string quartets, No. 12 in E-flat Major, Op. 127, where the alchemical interchange between the players reaches far beyond the realms of notes, thoughts, and temporal reality.

The Mirós play wonderfully in that quartet. Their opening Maestoso – Allegro may not embrace the dynamic extremes and subtle shading that distinguishes the Takács Quartet's performance in their set of the complete Beethoven String Quartets, which is available for download in 24/48 and streaming in 24/48 MQA, but their approach nonetheless reaches deep into the music's spiritual core. And in other quartets, e.g. the String Quartet No. 14 in C-sharp Minor, Op. 131, the Mirós embrace the tender longing at the heart of the opening Adagio, and the courtly grace of the fourth movement. Their rendition of the String Quartet No. 13 in B-flat Major, Op. 130/133, which includes a virtuosic performance of the astounding Große Fuge and also its replacement finale, captures the extremes of grace and tenderness.

The main reservation concerns the sonics. Perhaps because Session producer / Recording & Mastering engineer Da-Hong Seetoo attempted to equalize the sound of files set down in four locations between October 2004 and February 2019, there's a pervasive grayness to the recording that sets it apart from the finest sonic records of these works. On my system, I needed to use a Roon Nautilus+ and ultra-expensive cabling from Nordost and Wireworld to feed signal from a dCS Rossini DAC/clock into a D'Agostino Momentum HD preamp before I could clearly distinguish the Miró's four instruments. Even then, engineering choices relegated two of the instruments to the left side of the soundstage and the other two to the right, with a curious division between them that I did not experience in several other hi-rez string quartet recordings that I sampled from my collection and streamed from Tidal and Qobuz. It's a shame, because violinists Daniel Ching and William Fedkenheuer, violist John Largess, cellist Joshua Gindele, and violinist Sandy Yamamoto (in the early Op. 18 quartets only) are some of America's deepest reaching chamber musicians.