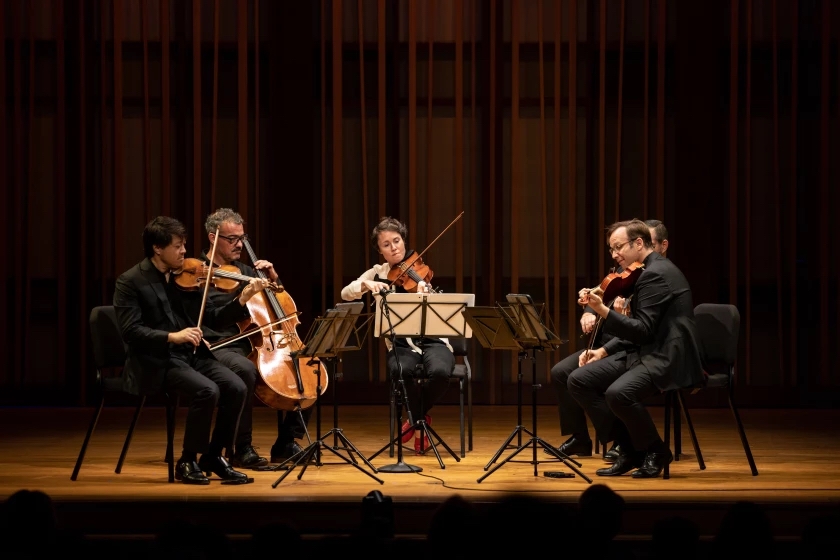 By Christian Hertzog for The San Diego Union-Tribune. Photo by Sam Zauscher.

After the 2013 Pulitzer Prize for music was awarded to Caroline Shaw, many composers outside of New York asked, “Who?”

Shaw was better known then as a violinist and singer than a composer, with limited recognition beyond Brooklyn or Manhattan. Now she is a distinctive voice in American music.

The first concert was in Baker-Baum Concert Hall, introduced by Shaw herself. She took a seat on the side, with the formidable Miró Quartet center stage for the West Coast premiere of “Microfictions, Volume 1.”

Inspired by the flash fiction of T.R. Darling, Shaw wrote her own microfiction, seven in all, each one- or two-sentence story read by her before the corresponding music was performed.

She described her music as very brief, but in the context of 20th-century miniaturists like Webern or Kurtág, Shaw’s three- or four-minute movements seemed generous indeed. Instead of the 10-bar aphorisms I expected, each movement focused on one or two textures, feeling more akin to etudes than miniatures.

In her Pulitzer Prize winner, “Partita,” Shaw combined a highly eclectic number of vocal techniques and musical styles in the form of a Baroque dance suite, with a popular music flavor.

In recent works, she uses major and minor triads in untraditional ways. Conventional rules of harmony — chord A leads to chord B, which must move to chords C or D — are broken. Shaw is not the first composer to use triads this way. Satie, Debussy, Virgil Thomson, and more recently, Laurence Crane all did this, but aside from that commonality, her music is an original take on the proposition.

In “Microfictions,” Shaw’s music doesn’t mirror her texts so much as expand upon them. A summer storm described in one sentence becomes several minutes of flickering triads interrupted by chromatic scales dissonantly moving upward, only to return to the opening material and then fall apart. Photographs coming in and out of focus are musically translated into dissonant glissandos that arrive at triads.

The Miró Quartet was dramatic and highly polished. Following this, Shaw joined them on viola for a passionate performance of Mendelssohn’s String Quintet, effortlessly integrating into the Miró’s impeccable ensemble work.

Following this, a smaller crowd convened in The JAI. There, Shaw’s compositions were surprisingly well interleaved with Ravel’s String Quartet. She sang two of her works with the Miró accompanying, “Cant voi l’aube” and “And so.”

Her voice had minimal vibrato, in a folk music style. The vocal melody had an Anglo-Celtic folk influence as well, although the form was freer.

The Miró played a movement, “The Cutting Garden” from her string quartet “Plan & Elevation,” which quotes the opening notes of Ravel’s first movement, an unexpected callback to the beginning of this program. Along the way, snatches of other composers pop in and out, anchored by a repeated rising four-note line in the cello (also from Ravel?).

Most impressive, though, was her recent piano quartet “Thousandth Orange.”

Pianist and SummerFest director Inon Barnatan took the stage with members of Miró (William Fedkenheuer, violin; John Largess, viola; and Joshua Gindel, cello). Barnatan’s quiet touch sounded a four-triad pattern that sequenced over and over, although the rhythm varied. On top of this, the strings layered a transposed version of the sequence, creating a dialogue between these variations.

The performances in this second concert were all riveting, and musicians and composer were given heartfelt applause throughout.