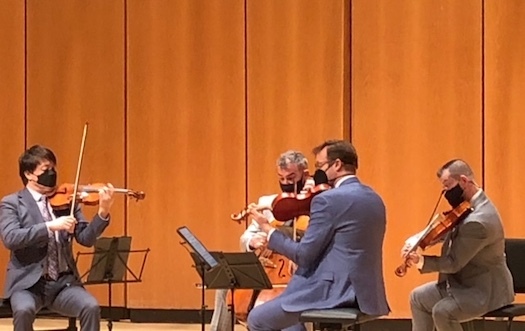 Of the numerous local cultural events canceled in the wake of the pandemic over the past two years, those of the Northwestern University Bienen School of Music’s annual Winter Chamber Music Festival have been particularly regrettable.

The 2020 edition had to be curtailed, last year’s fest was scrapped in its entirety, and this year’s event lost its opening weekend, which was to have comprised concerts by the Ariel and St. Lawrence string quartets. (The ensembles will be rescheduled, according to festival director and Bienen School faculty member Blair Milton.)

Now, with the start of the new year, area classical music presenters are cautiously returning to a semblance of normalcy in their immediate and long-range planning, and the Winter Chamber Fest is following suit.

Thus it fell to the Miró Quartet to perform the actual opening concert of the abbreviated 25thanniversary season Winter Chamber Music Festival on Saturday night in Pick-Staiger Concert Hall in Evanston. There are two more events in the series this month and next, welcome news for chamber music aficionados starved for the pleasures of live music during the long Covid-induced lockdown.

The Miró foursome is now in its 27th year and its 19th as resident ensemble at the Butler School of Music at the University of Texas in Austin. Saturday’s concert marked its first appearance at the festival since 2014.

As the first string quartet ever to receive the prestigious Avery Fisher Career Award, the highly respected group—which takes its name from the great Spanish painter and sculptor Joan Miró—ranks high among the finest chamber groups American has produced within the last three decades.

Violinists Daniel Ching and William Fedkenheuer, violist John Largesse and cellist Joshua Gindele play with the confidence, precision and interpretive singlemindedness of ensembles many years their senior. The four clearly enjoy playing together, and their shared enjoyment carries over as much in the audience’s reaction as in the polished vitality of their performances.

All this was much in evidence in the Miró’s account of Kevin Puts’ string quartet Home, the centerpiece of Saturday’s program, which bracketed the 2020 work with equally assured readings of standard repertory by Mozart and Ravel.

Puts received a Pulitzer Prize for his acclaimed opera Silent Night in 2012 and his close association with the Miró led to his composing several works for them including this, his fourth string quartet, in 2020. Puts took as his inspiration the humanitarian crisis of displaced migrants and refugees in which Europe had become enmeshed at the time. Questions of who belongs where and what “home” means to whom find musical expression in his 12-minute piece.

The four instruments are tuned to the pitches of C Major rather than the usual circle of fifths, creating a dulcet harmonic cushion of “home” from which the players-migrants abandon for sometimes alien harmonic realms, only to return to the tonal center at the end. The music fans out in waves of increasing dramatic intensity from the rocking motion of the string-crossings of the outset. Surges of contrapuntal activity, doubtless meant to represent displaced persons seeking safe havens, find the materials fragmented and combined to produce new and sonically intriguing musical shapes. Sweeping gestures seize the final pages in what sounded to these ears like an ambiguously happy resolution of a continuing world crisis.

The uncanny precision, force, beauty and commitment of the Miró’s performance marked Home as an important addition to the contemporary American string quartet repertory. One may expect other groups to take it up although none are likely to surpass the mastery Saturday’s players brought to it.

The first thing that struck this listener in the opening pages of Maurice Ravel’s String Quartet in F was the exceptional refinement and variety of tone color the Miró brought to this 20thcentury masterpiece. (These splendid musicians don’t call themselves “Miró” for nothing.) The second thing was how deftly they tempered American vitality with Gallic elegance. Rhythms were lucidly defined, linear organization was acute. And while violinist Ching and colleagues (he and cellist Gindele are founding members of the quartet) maintained razor-sharp accuracy and forward drive, they never slighted the sensual aspects of Ravel: the score’s marking très doux (very sweet) was always prominent in their timbral arsenal. A triumphant reading all around.

Mozart’s String Quartet No. 17 in B-flat, K.458 (“The Hunt”), a late replacement for the originally scheduled Samuel Barber Quartet, began the concert on a note of finely judged Classical balance, proportion and mellifluous tonal grace. While Ching did much of the melodic heavy lifting, each player responded alertly to some of Mozart’s most felicitous part-writing among his set of “Haydn” quartets. Tempos were brisk but never rushed, while melodic exchanges and phrasings bespoke warmly intimate conversation among friends.

The encore was Jerome Kern’s own silken arrangement for string quartet of his classic song “Smoke Gets in Your Eyes,” affectionately and, like everything else on the program, beautifully played.