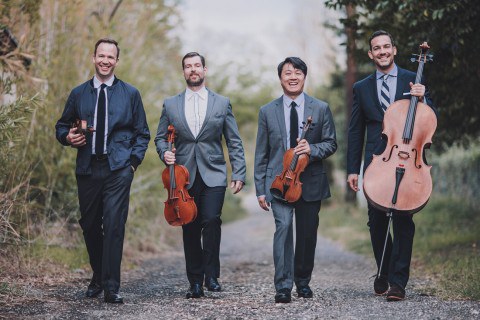 By Eric Fishman for The Arts Fuse

All the new thinking is about loss.In this it resembles all the old thinking.  — Robert Hass, “Meditation at Lagunitas”

In preparing to write this review, I faced two temptations.

The first temptation was rooted in my skepticism about classical concerts organized around themes. To me, thematic concerts tend to be a marketing ploy aimed at watering down the complexity of classic music. Who can really say what any piece of music is “about”? Thus, I was uncertain at how I would feel attending a concert purportedly “about” loss and resurrection, particularly on the evening of Good Friday.

This first temptation dissipated soon after I examined the evening’s program. The Miró Quartet joined A Far Cry to design this program for a single performance in Jordan Hall on March 30. The pieces — Beethoven’s Quartet No. 16, Kevin Puts’ Credo, and Richard Strauss’ Metamorphosen — all resist facile interpretation of their “messages.” My second temptation was, in reaction, to look for a way to intellectualize the concert, to treat the three pieces as an assertion about how impossible it is to ever conclude what a composer “thinks” about a topic such as loss.

Underneath the opening motif of the last movement of the Beethoven, for example, the composer wrote a worded exchange between the lower and upper strings. “Must it be?” ask the viola and cello. “It must be!” reply the violins. Does this dialogue represent Beethoven confronting the end of his life? Or does it simply depict an argument with a friend who owed him money, as some scholars assert? On the other hand, Strauss, composing in the closing months of the Second World War, quotes Beethoven’s Eroica symphony. On the score, he wrote “In Memorium!” below the score, leaving musicologists to debate the meaning of this wording. Was Strauss mourning the recent loss of the Vienna Opera house in a bombing, and with it the death of German art? Was he mourning the forces that drive humans to wage war? Or did he choose to quote the Eroica because he had become disillusioned with Hitler, just as a disillusioned Beethoven scratched out his symphonic dedication to Napoleon? It’s difficult not to be drawn into the complexity of these debates.

Yet this temptation toward analysis was shattered by the concert itself, which was such a human and heart-centered endeavor that I felt almost ashamed at having tried to approach it from the angle of abstract scholarship.

First of all, A Far Cry is simply more interesting to listen to, and watch, than a symphony orchestra. True, eighteen players – or twenty-two when joined by the Miró Quartet — cannot match the immersive volume of sound that a hundred-piece orchestra can produce. Yet whereas even some of the best orchestras in the world are no more than organic machines — responding to the behest of one man or woman standing at the front — the self-conducted and democratically-led A Far Cry is a miniature ecosystem of personalities.

This ecosystem of musicians was best represented by the last piece of the program, Strauss's A Far Cry at Jordan Hall. Photo: A Far Cry.

This idea of musical community as a healing space led me to reinterpret how I listened to Beethoven’s Quartet No. 16, Op. 135. This was the last complete piece he wrote, and the first performed on the concert. Violinist Alex Fortes of A Far Cry arranged the quartet for string orchestra. For this piece, the members of the Miró acted as section principals.

How was the experience of listening to this composition different when arranged for chamber orchestra? The late string quartets are intensely personal — almost conversations among the voices in Beethoven’s head. The composer wrote Op. 135 in 1826, over a decade after he had become completely deaf. The four voices of the quartet spun in his brain, closed off to sounds from the outside world. At moments, the intimacy of this quartet seemed violated in an orchestral setting.

However, this arrangement also encouraged great ranges in dynamics and colors. During the first movement, the low melodies were passed between cellos and bases. Segments of melodic and harmonic texture were passed between the sections. In the scherzo, the group crafted a dense undercurrent of sound, with a melody skipping gaily on top – almost like a country dance hall. With all these players the sudden interruption of the E-flats was dramatic, and the group emphasized these moments even more with a significant retard.

The third movement, though, is the heart of this piece. Four remarkably static variations make up what Beethoven originally titled a “sweet song of peace and calm.” John Largess of the Miró and A Far Cry violist Caitlin Lynch shared a long and intense moment of eye contact before beginning. Ching soon entered solo over a lush backing. With so many musicians behind him, he seemed pushed to the fore as a protagonist. The orchestra became a Greek chorus, offering commentary on the piece’s themes. And so Beethoven’s lonely song inside himself became a community, singing together.

Of all the late Beethoven string quartets, Op. 135 was an unexpected choice for a concert about loss. These quartets are full of moments of transcendent mourning – of Op. 131, Wagner reportedly asserted that it “reveals the most melancholy sentiment expressed in music.” The breathless hymnal third movement of Op. 132, “A Convalescent’s Holy Song of Thanksgiving to the Deity, in the Lydian Mode,” which Beethoven wrote after recovering from a painful illness, would have also seemed an obvious choice. Compared with the unearthly harmonic progressions and strange forms taken by the other late quartets, Op. 135 seems vintage, almost a throw-back to the middle or late period quartets. It’s less convoluted and decidedly less serious. And that is precisely what makes it such a fascinating choice for this concert of “loss and resurrection.” After all of the anguish, Beethoven seems to have found respite in the geometry of the musical forms he inherited.

Beethoven finds simplicity amid turmoil. Kevin Puts depicts three moments of solace. For a little over an hour, the audience was given the solace of this concert. I had almost forgotten that musical communities could be healing spaces.